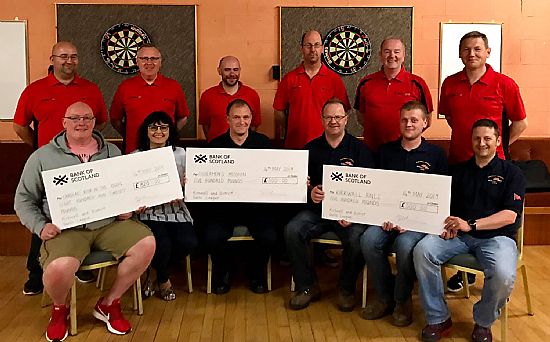 THE KDDL Orkney darts committee held its annual charity cheque presentation last week, making the end of the season.
The Fishermen’s Mission and Kirkwall RNLI each received £500 for their annual donation from money raised at the Davie Cooper Memorial Darts, meanwhile the Freya Rose Dalrymple Memorial Fund set up to provide heart screening for the young here in Orkney through charity CRY (Cardiac Risk In the Young) received £820.
Money was raised at the Steven Flett Memorial darts and at the darts trophy presentation night when the Tattie Bogle Shield was also held.
Charlie Tulloch at the Kirkwall Masonic Club also contributed money by organising a raffle and other fundraisers at the club prior to the darts. Thanks to all who contributed so generously.