A new book of writing by George Marwick is to be launched on Tuesday 2 September with a talk by its editors, Tom Muir and James Irvine. 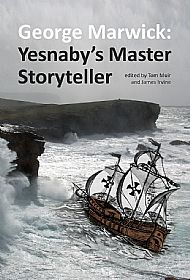 George Marwick, 1836-1912, was born and bred of crofting folk in the isolated township  of Yesnaby on the west coast of the Mainland of Orkney, exposed to Atlantic storms but sheltered from 19th century improvements.   He became a surveyor and worked in Canada and Hoy before returning to his first love, the people, traditions and folklore of the West Mainland.  For a quarter of a century he was a popular speaker on these subjects at local events.

This volume contains all his known writings, many published for the first time. Geordie, as he was known, was not always accurate and his etymology in particular is now dated, but his profuse and detailed records of folklore, local traditions, dialect and archaeology are unique, and provide a fresh and an invaluable contribution to our knowledge of Orkney’s rich heritage.

Tom Muir is Exhibitions Officer at the Orkney Museum and a much-travelled storyteller.  He is a writer and broadcaster who has published several books on subjects like Orkney folk tales and the Icelandic Sagas.  His book The Mermaid Bride; and other Orkney Folktales has been translated into Japanese and Icelandic.

A retired seafarer and now a keen genealogist, James Irvine has written several books on Orcadian history, including the story of The Breckness Estate. His ancestors lived in Yesnaby long ago, and his great great grandfather, like George Marwick, was a tenant of the same estate.

The launch of the book will take place Upstairs at the Orcadian Bookshop on 2 September at 7.30pm (Entrance up lane) and royalties from the book will go to the Heritage Society.