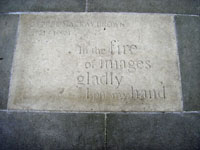 A memorial to George Mackay Brown has been unveiled in Makars' Court in Edinburgh. Makars' Court is situated in Lady Stairs Close next to the Writers' Museum. Inscribed paving stones commemorate Scottish writers from the 14th century to the present day. The inscription gives the writer's dates along with a quotation from their works. The quotation for George Mackay Brown reads "In the fire of images gladly I put my hand". The Heritage Society is pleased to have made a contribution to this memorial.

The Groatie Hoose project has been awarded a Commendation in the 2005 Dynamic Place Awards. This was presented at a ceremony on 24th November. Further information on these awards can be found at www.scottish-enterprise.com/dynamicplaceawards/

The restored Groatie Hoose was formally opened in its new location in Tankerness House Garden on Saturday 4 June.

The opening ceremony was performed by Bryce Wilson, who gave a short

history of the building and its association with Pirate Gow. Spencer Rosie, Chairman of Kirkwall Community Council thanked all those who had contributed to the project and Leslie Burgher gave an account of the architectural features and paid tribute to Casey Construction for their expertise in the dismantling and reconstruction.

To see a short note about the Groatie Hoose click

Prizes for the 2005 Fereday competition were presented at a ceremony in Stromness School on 22 March.

Winner:
The winner was Izzy Whitford with an investigation entitled "The Role of Women in Lyness during WWII."

Copies of the best submissions can be found in the Orkney Archive at the library in KIrkwall. 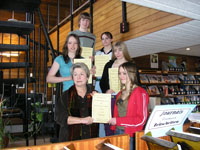 The Marjorie Linklater Writing Awards for 2005 were presented at a ceremony in Stromness School on 18 March. Kristin Linlater, who is a Professor of Drama in New York and a daughter of Marjorie, made the presentations.

The following entries were highly commended:

One story was commended:

"A Historic Day for Orkney" by Tim Ross