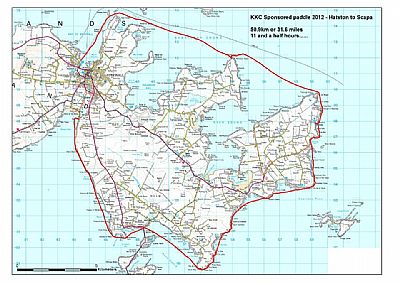 This weekend saw Kirkwall Kayak Club undertake two sponsored paddles in order to boost club funds.  The aim of the fundraising drive was to raise money with which to maintain club boats and equipment and to allow the club to buy kit so more local people can get into the sport of kayaking in Orkney.

On Saturday, 9 KKC members, including 3 juniors, made the 10km paddle from Holm Village to Scapa Pier.  The weather for the paddle was lovely and the members took their time enjoying the scenery.  As thunder was heard over Caithness, a 10 foot basking shark appeared by the group, adding another bonus to the day.  Upon arriving at Scapa, the paddlers were met by a welcoming party who brought soup to warm up tired boaters. 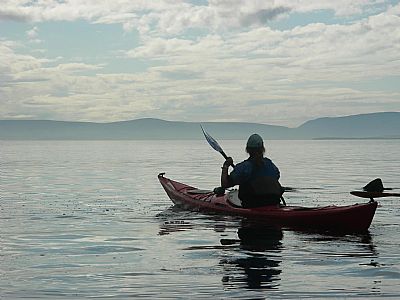 Early on Sunday morning, 10 club members met on Hatston Slip so that they could catch the tide out of the String and through Shapinsay Sound.  The intended route was from Hatston to the 1st Barrier so that in combination both paddles would circumnavigate the East Mainland.  As the paddlers left Kirkwall, the weather was perfect and the kayakers reached a speed of 16km/h on the tide.

The first stop was at the Rerwick, before the paddlers crossed to Mull Head.  An interesting little tiderace was observerd at the head and everyone had fun paddling though it.  The east coast of Deerness again gave something interesting to explore and the weather was glorious, as the paddlers headed into the Gloup.  Lunch was at a sunbaked Sandside.  Continuing round the coast, the kayakers passed Newark Bay and Dingieshowe, landing at the Castle of Claisdie for a break after around 30km.  The east side of the Roseness coast was a little more lumpy as the south-easterly wind picked up but there were still plenty of oppotunities to explore a few caves.

Reaching Roseness point, the seas were noticably rougher and the weather had changed for the worse, with the south-easterly picking up.  The participants made the most of the conditions and rode the wind and waves all the way to the 1st barrier, a distance of some 40km or 25 miles.

Upon landing at the 1st Barrier, 2 members of the club decided they would like to complete the East Mainland circumnavigation in one trip so portaged over the 1st Barrier in order to continue the journey to Scapa.  Approximately an hour and a half later, they were welcomed at the pier having completed 50.9km or 32 miles, the furthest either memember had paddled in one day.

A great effort by all participants who hope their efforts are well rewarded.  To find out more about Kirkwall Kayak Club, visit the website at www.orkneycommunities.co.uk/kirkwallkayakclub/ 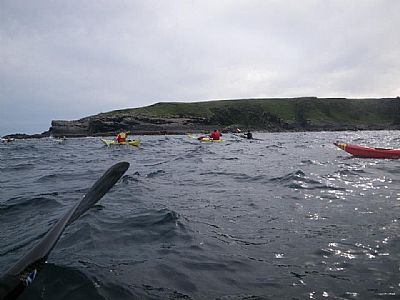