Orkney Field Club flushed some top brains out of the undergrowth to take part in the annual “environmental” Christmas Quiz.
Against the likes of SNH, RSPB, Aquatera, ICIT and ‘the Cooncil’ we put in a strong performance in Round One; “name that Beer” and scored maximum points sampling and correctly identifying 10 Orkney Ales. Which also meant we won another tray of “samples” to see us through Round Two which was “Name that Sweetie”.  Our mis-spent youth obviously paid off in both these rounds….
Through General Knowledge, all about Shetland and two tricky Orkney Photograph rounds we managed to stay ahead throughout the night, and secured a victory for the Club – and the sought-after trophy “critter tartaniensis” (a fluffy haggis in a green plastic goblet).
The final round was a test of our performance skills, the task being to compose and perform a ditty based on the theme of Orkney Nature Festival.  Our rendition of “Puffin Cruise” to the tune of “Jingle Bells” was obviously a hit (and I’m sure Julian will be wanting to include it in the 2014 ONF advertising…)
In the past we have had to hold back and be content with second place; for winners used to also ‘win’ the dubious honour of hosting next year’s event.  However, the rules have been relaxed, so that the top team is immune, and actually get to draw the name of the organisation who will take on this onerous task.
The team – Anne, Jenny, Penny, Dick, Dave and John would all like to thank Historic Scotland for hosting the fun night, and say roll on December 2014! 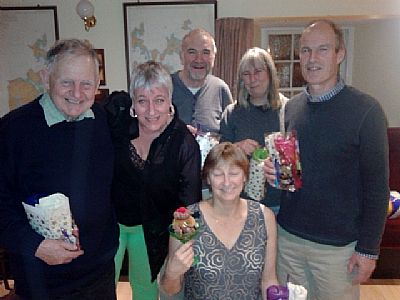