The 2017 season is now over and the Annual Presentation took place on Friday, 22 September 2017 at Stromness Golf Club.  The trophy and award winners are set out below and the full results for the various series can be viewed by clicking on the links given. 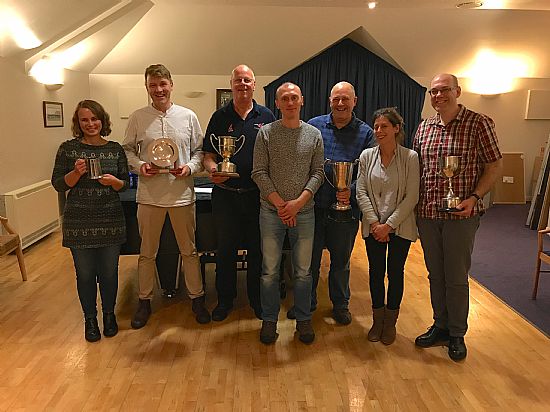 Points Series (May to August)

The 2017 Points Series concluded at the end of August and took account of the combined results for the May Tankard Series, the Summer Series and the Commodore's Cup Series.  The final result was as follows:

The May Tankard Series has now concluded. The first three boats and helms in the series were:

The Summer Series has now concluded and the full results can be seen via the link above. The first three boats and helms in the series were:

The Commodore's Cup Series ran throughout August, with one week's Thursday evening sailing being lost due to lack of wind on 17 August and only two out of the normal three races sailed on 24 August.

Skeldro is normally helmed by Mark Taylor with Lewis Burgon as crew but for the five races when the boat sailed in this series it was Lewis who helmed with Mark as crew. Well done Lewis for achieving three firsts, a second and a fifth for those races.

Taking the series as a whole the first three boats and helms in the series were:

Representing the Club at Orkney Regattas

Awarded to David Bews who has not been dinghy sailing in 2017 but who has regularly turned up to man the safety boat Hunter 2.

The wind was WNW and coming to the harbour over the houses and was quite flukey at times making for some awkward sailing conditions, but at least there was enough wind to ensure that three races could be sailed to determine the trophy winner. The results of the three races were aggregated to determine the winner on the low points system.

Good starts were made by Boreas and Bonxie who were the first boats round marks 1 and 6, followed by Rio and Fiddlesticks. Then Fiddlesticks was able to gain the lead on the way to mark 2 and managed to hold the lead until the leg down to mark 7. Bonxie was first round the mark but chose to go close inshore rather than tack straight after the mark and was slowed down by picking up seaweed. This enabled Fiddlesticks to go through and take the win with Bonxie second and Rio third.  Go Faster Blue and Go Quickly Red were very close together as they approached the line but Go Quickly Red just managed to swing her bow over the line ahead.

In the second race, Fiddlesticks took an early lead and maintained it throughout the race, leaving it to the others to fight it out for the minor places.  Go Faster Blue held second place for most of the race with Bonxie, Go Quickly Red, Boreas and Rio playing catch up and occasionally changing places. Go Faster Blue was again caught by Go Quickly Red right on the finish line.

The third race again saw Fiddlesticks take an early lead and hold it throughout the race. The fleet was split by the Hamnavoe ferry sailing through the second leg of the course with seven boats passing ahead of the ferry and two behind. This had no real affect on placings. Bonxie came through to take second place and this time Go Faster Blue had a clear lead over Go Quickly Red and was able to secure third place.

The challenge was won by Fiddlesticks helmed by Neil Foubister and crewed by Emma Thomson. Stromness SC Commodore, James Burgon, congratulated the winners. The trophy was not available to present on the night but will be given to Neil Foubister at a later date.

The full results were:

Thanks go to Dave Bews and Willie Mackay for manning the safety boat, Hunter 2.  Iso Tipler was the starter.