With the exact replica costumes, pyrotechnics, blood spitting, fire-breathing and all the best known songs - delivered with sound-alike vocals - DRESSED TO KILL recreate both the look AND sound of a full-on KISS show. 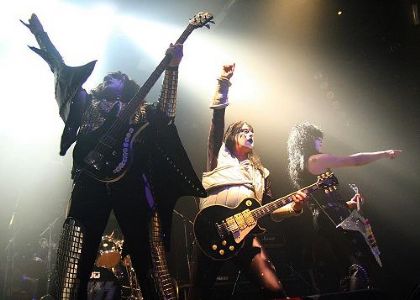 Formed in 1990, DRESSED TO KILL's first show was on 30th Oct 1991 and was documented in Kerrang! magazine, who devoted 3 pages of colour pictures, and a glowing review of their live debut.

Since then, the band has wowed audiences at shows and KISS expo's all over the UK, and in Spain, Sweden, Norway, Germany, Austria, Switzerland, and Japan, with the band appearing on Mtv and in various UK, European and Japanese magazines as they've 'conquered' each
successive Country.

DRESSED TO KILL have been engaged by KISS' record companies to promote product releases - most recently KISS' newest album: 'Sonic Boom'; and have also featured at various Music shows, including opening 'Guitarfest' in 2006, and appearing at the 'Titans of Tribute' event as part of Music Live's 10th Anniversary event; But being personally requested by Gene Simmons to enact a KISS show for the pupils in his Channel 4 series 'Gene Simmons: Rock School' is a particular accolade, and perhaps says enough about their ability to deliver a KISS show, even to KISS' satisfaction.

DRESSED TO KILL return to ROCK 'Fusion' in Kirkwall on Fri 30th Sept - DO NOT MISS!!