On Friday 10th June small groups of people carrying large cheques popped up in various locations in Kirkwall, as the funds raised by the 2011 Orkneycommunities.co.uk calendar were disbursed.

The total funds raised were £1875, so CLAN Orkney, Macmillan, and CLIC Sargent as the three charities benefitting each received £625. 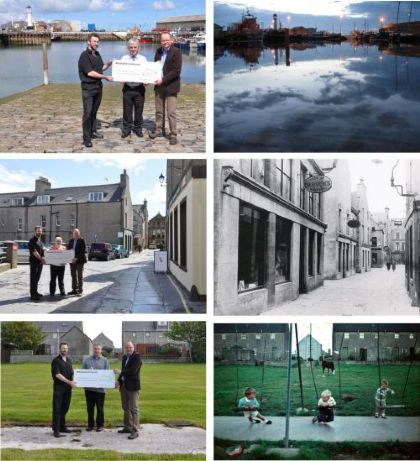 In an homage to the calendar itself, the pictures recording the handover of cheques took place in locations that featured prominently on it, namely the Corn Slip (June), Bridge Street (January), and the King Haakon Street playpark (March).

David Tullock as Chair of Macmillan in Orkney received their cheque on the Corn Slip, appropriately so as his childhood misadventure in falling into the Basin from it is recorded in the Orkney Image Library, the source of the calendar pictures.

The CLAN Orkney cheque was received by Karen Scott, CLAN’s Islands Co-ordinator, who also runs their drop in centre in Victoria Street, Kirkwall, where people affected by cancer can speak one-to-one with their trained Support Volunteers. The donation from the calendar proceeds was handed over on a much changed Bridge Street, and will contribute to supporting weekly yoga classes for anyone affected by cancer.

Kenny Thomson is Coordinator of the CLIC Sargent Orkney Supporters Group, who received the cheque on the exact site of the swings being played on the March picture- sadly the swings have now gone. The money raised will go towards the facilities and services in Scotland used by young cancer patients from Orkney provided by CLIC Sargent.

The cheques were handed over by Steven Heddle and Leslie Burgher from Orkneycommunities.co.uk.

Steven is the Orkneycommunities webmaster, who put together the calendar project and compiled and edited it. This was done with the indulgence of the Orkneycommunities.co.uk committee who agreed to fund the upfront costs of production. He was understandably relieved that it made a profit:

“It’s great that we managed to raise a reasonable amount to give to each of the chosen charities- in the end we sold about 600 calendars, but it was tense until we passed the breakeven point!

“All the time spent on this by everybody, and all the use of the pictures has been given for free, so I’d like to thank the contributors of pictures, our sponsors, and all the shops and individuals who sold copies for the benefit of these good causes.”

Leslie Burgher is the chair of Orkneycommunities.co.uk, and he backed up Steven’s comments:

“It was a project we were glad to support, because of the good it could do, and also because it brings attention to the excellent pictures and stories that the Orkney Image Library contributors send in.

“We’re delighted that so many people bought the calendar, and hope that they keep them for their next usable year in 2022!”