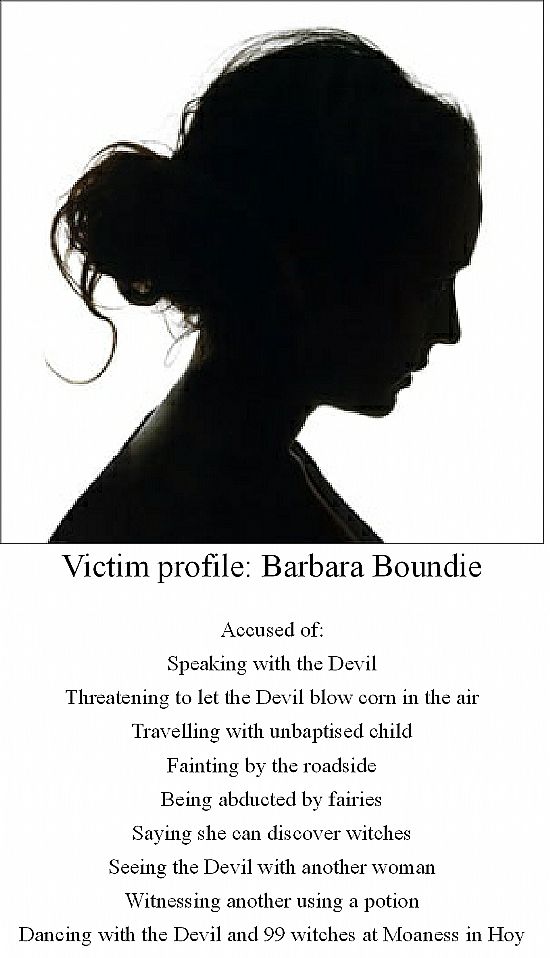 Nobody knows precisely how many people were tried for witchcraft in Orkney, as some records are lost, and some local investigations may not have kept records at all. The folklorist Ernest Marwick, a founding member of the Orkney Heritage Society, dedicated much scholarship to finding and studying the surviving court records from the Orkney witch trials. He reckons with around 70 accused. Edinburgh University’s Survey of Scottish Witchcraft found 72, out of a Scottish total of c. 3800.

The Beginning
1594 was a dramatic year in Orkney. Patrick Stewart – or “Black Patie” as he was known – had just succeeded his father as Earl of Orkney, whereupon his brother John immediately attempted to poison him. Meanwhile, in East Lothian, their first cousin King James VI was panicking, thinking a conspiracy of witches was out to kill him. Travelling home from Denmark with his newly wedded wife, James and his ships had been hit by a ferocious storm, which James thought had been raised by witches. As a result, he brought charges against the “culprits” in what became a massive chain of trials, lasting two years (1590-92) and implicating around 70 people. After this experience, James went on to become a main stirrer of witch hunts in Scotland, and author of Daemonologie: the witch hunter’s handbook, published in 1597. In this intellectual climate, a poisoning attempt against the earl was easily explained within the framework of witchcraft. The Stenness woman Alesoun (Alison) Balfour was arrested and brought to Kirkwall, where she was imprisoned and tortured. Alesoun withstood her own torture but could not bear to see her little daughter tortured. Alesoun Balfour was the first of many victims of the witch hunts which lasted until around 1700 in Orkney and 1727 in Scotland.

Witch trials in times of turmoil
The witch trials in Orkney tended to occur in clusters, as if a panic flared up from time to time. These flare-ups came in times of turmoil such as political upheaval or famine. A cluster of witch trials coincided with James VI’s siege of Kirkwall and Earl Patrick’s downfall in 1615, but without any evidence of a direct link other than the general unrest in the period. Much also seems to depend on the persons involved: One keen witch-hunter in a position of power can make a big impact. Henry Smith, minister of Shapinsay, was a central figure in the trials of 1642-44, the largest cluster of trials. He was bent on getting something on Marjorie Paplay, and had her brought in for trial twice, but her son, James Baikie of Tankerness, defended her well. Another central figure was the Sherriff Depute, Henry Aitken. The trials of the 1640s contained a chain of accusations, where the technique was to get an accused witch to name others, under torture, who in turn would be investigated and brought to trial.

History and folklore
In addition to the court records, memories and stories of witchcraft have also been passed down in oral tradition. The best-known victim of the Orkney witch trials is Janet Forsyth, known as the Westray Storm Witch. In the folk story, Janet was a recluse with a gift for knowing the weather, who fell out of favour with the local community when she guided a storm-ridden ship safely to harbour. She was brought to Kirkwall and held in the cathedral dungeon, Marwick’s Hole. But she was rescued from execution by her sweetheart Ben Garrioch, who had been taken by the Press Gang years previously and returned home just in time to save her.

Sadly, Janet Forsyth’s court record is very different from the folk story, and has no indication of a happy ending. In 1629, she was accused of slaying four pigs, which subsequently caused illness in a woman who ate from the pork. Furthermore, of bewitching two men to make them ill and afterwards healing them again, magically taking the fat out of the milk of other people’s cows and the food out of their grain, and putting curses on people who refused to give her food or drink when asking for alms. Janet was sentenced to be tied up and taken to the top of the Clay Loan, where she was to be tied to a stake, strangled and burned.

What is witchcraft?
It is striking that the witnesses quoted in the court documents bring up as evidence happenings which lie far back in time: seven years, twelve years, even up to 25 years. If they witnessed someone using witchcraft, why did they not speak out at the time? The reason is that many of these practices were commonplace and would not be regarded as anything out of the ordinary unless there was a desire to see the person punished. In a rural community with limited access to orthodox medicine, people did what they could to keep their families safe. Wise women and men with experience of treating ailments would do what they could for members of their families and communities. These treatments consisted of a mixture of herbal medicine and advice on diet, which we can now see made a lot of sense, and other rituals and prayers which to us make less sense, but which made sense to them. For example, a common ritual was to heat up three stones in the hearth, cool them in a bucket of water, and wash the patient in the water, who would then benefit from the healing powers of the stones. Or you might attempt a cure by putting your hand on the patient and then on a cat to transfer the illness to the cat.

Witchcraft wasn’t all about healing. “Witchcraft, necromancy and sorcery” had been a capital offence in Scotland since 1563, and also illegal was commissioning someone to perform witchcraft for you. In addition to causing and curing illness, witchcraft was also thought to be the cause of other kinds of accidents and misfortunes, and of sudden bad weather. Some were believed to have the ability to control the weather and might sell fair winds to sailors. Communicating with fairies and otherworldly creatures was also witchcraft, because supernatural beings were classed in the same league as demons. So when the homeless single mother Barbara Boundie fainted by the roadside and was rendered speechless for some time, this was taken as evidence that she had been away with the fairies for that time, and thus in league with the Devil. While first denying it, Barbara after much questioning and perhaps torture confessed that she had been deceived by the Devil and danced with him and 99 witches on the links of Moaness in Hoy. Today, we would regard Barbara Boundie as a vulnerable (but strong!) individual, and most importantly, innocent of crime. We therefore commemorate her and the others who suffered humiliation, imprisonment, harsh questioning and biased investigations, torture and in the worst cases execution for the perceived crime of witchcraft.

Further reading
If you would like to find out more about witchcraft trials in Scotland, see our links page.