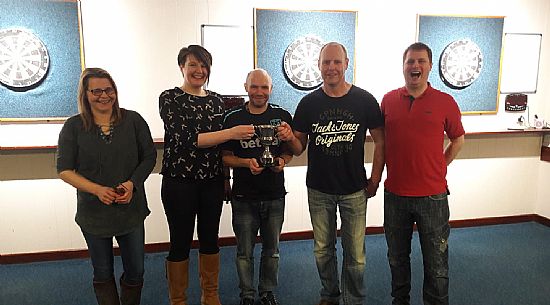 Richard Polson, centre, presents Kevin and Shona Gray with the mixed doubles cup. Runners up, Nicky Laird and Gary wilson, pictured on the outside.

The penultimate week of KDDL league action has passed, and both League champions are now known.
Two convincing wins for the Legion over Legion Arrows and Warriors were to prove enough to secure their tenth 'A' league title in succession.
Down at the deep end, the Nomads secured a valuable point against Wanderers, which set up a tense Saturday night clash with the Arrows, with both teams knowing a win would be crucial in any attempt to beat the drop.
A close match was anticipated, and so it panned out with both teams having to settle for a draw, a result which favours the Nomads, but the Arrows still have a slim possibility of survival.
It's been coming for what seems like an age, but pre-season favourites, and KDDL debutantes, Exiles finally secured the 'B' league title following a 10-2 win over Sanday 'B', which they then followed up with an 11-1 pummelling of the Young Loons.
Shapinsay have all but secured the second promotion spot with a win over Murray Arms, and a draw with Tankerness.
The Sands lost out to Quoyburray and are unfortunately assured of the wooden spoon, but there have been some real signs of improvement recently, which they will hopefully build on next season.
Friday night saw the Legion play host to the mixed doubles, with the champions going forward to compete for the Orkney Mixed Doubles title on the Orkney Championships night in April.
There was a disappointing turnout of only 8 couples, so the decision was made to play two groups of four, with the winners meeting in the final.
Kevin and Shona Gray progressed from group one and met Gary Wilson and Nicky Laird in the final. Although there wasn't much in it from a scoring point of view, superior finishing ensured the Gray's mantelpiece had one more trophy sitting on it by the end of the evening.
This Friday sees the last of the ranking competitions for the season, the league singles, with the top 9 after the competition booking a place in the team to play Shetland.
They will then meet up on Sunday evening to vote for three wildcards plus reserves.
In the event of a tie for 9th place, a playoff will take place before the top 9 meet.
The 'B' team will also be confirmed after the league singles, unless there is a tie, in which case a similar playoff will ensue at the same time as the main ranking playoff (should it be required).
180s this week were hit by:  Simon Parry, Colin Kirkpatrick, Kevin Peace, Andrew Moar, Lee MacPherson, Craig Taylor, Ian Linklater, Brett Dickinson, Alan Findlay, Trevor Shearer, Stevie Garner, Jamie Rendall, Neil Drever, Jason Cook, Keith Bain, Jamie Drever, Gary Drever, Neil Croy, Derek Firth, John Hamilton, Nicol Gray, Erlend Ritch, Graham Firth, Gary Wilson, Erlend Lennie, Ivan Leslie, Ian Findlay (two), Kevin Gray (two), Ryan Wilkie (two), Robbie Stanger (two), Kevin Sarling (three) and Dennis Watt (six).  Ryan Wilkie also scored 177 whilst John Thomson had a 171.
High checkouts were hit by:  Neil Croy 100, Wayne Monkman 101, Neil Tait 105, Cammy Scott 106, Erlend Ritch 109, Derek Firth 112, Stevie Moar 112, Dennis Watt 112, Darryl Robertson 113, Alan Findlay 116, Ben Hogan 117, Jamie Rendall 117, Graham Firth 120, Ryan Tulloch 135, Ian Findlay 136, Raymie Rendall 148 and Kevin Gray 140, 141.