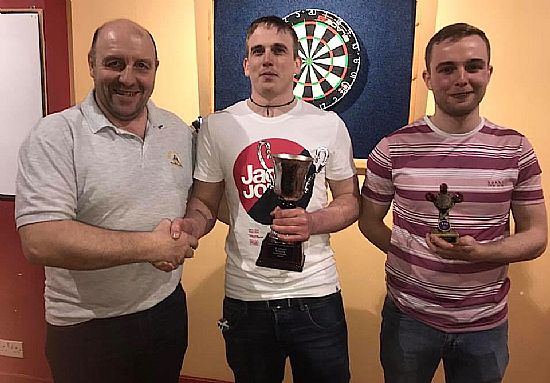 The B League singles took place in the Kirkwall Masonic on Friday night. With places up for grabs on the plane for the first ever B match against Shetland later this season, a large entry was expected.
It was a surprise that there was not more than the 22 entries, but numbers did not detract from the good quality of many of the games.
Jamie Drever won the cup last year, and he made his way through to the final, taking out David Henderson in the quarters and Brian Stevenson in the semi.
In the other half of the draw, Erland Ritch beat Jamie Rendall in the quarter-final and then beat Stevie Garner in the semi, with the help of two 180's.
They say it is harder to retain a trophy than to win it, and this proved to be the case. The final was a close one  before Erland took control and won the cup by a 5-3 scoreline.
Only three weeks remain in the KDDL league season, and everything is still all to play for, with no team guaranteed silverware, promotion or relegation as yet.
Several postponed games have their part to play in this, and the committee agreed at last week's meeting that all games must be played by Thursday, March 21, at the very latest.
The Legion took a massive stride towards another 'A' league title this week, narrowly beating perennial challengers Orkney Golf Club in a high quality match.
That leaves the Commodores as the only team left in the hunt but they must beat the Legion in their encounter and hope that the Arrows and Wanderers can do likewise!
As it stood, the Commodores were made to work hard against Wanderers this week, but ultimately came away worthy winners.
Elsewhere, Sanday kept up their chase for the runners-up spot by squeaking a win in the Masonic derby against Untouchables. Untouchables 'A' were also winners by the smallest margin over the Bilco Boys, whilst the Warriors recorded a good win over struggling Quoyburray 'B'.
Narrow victories seemed to be in vogue last week, as three out of five of the 'B' matches played ended up close.
Shapinsay, Muppets and RBL2 all saw off Tigers, Vikings and Tankerness 7-5 respectively.  The Young Loons put in another good performance in their win over Sanday 'B', but the chance for promotion has passed them by this season.
The Murray Arms preserved their slim chance of promotion with a convincing victory over Quoyburray.
This Saturday sees the 11th Tennent's Kirkwall Open take place in the Masonic, with players requiring to enter before 1.30pm.
It is sure to be a great day of darts as always, and it sounds on the grapevine like there may be an increased number of participants from “doon sooth” coming up to take part.
Players are asked to inform the 'control desk' as soon as possible once games finish, in order to allow the day to progress smoothly.
There will also be the usual bottle stall and raffle with some great prizes on offer. Any donations to the bottle stall will be very much appreciated.
180s this week were hit by:  Kevin Gray, Ian Findlay, Kevin Peace, Stevie Linklater, Freddie Tait, Alan Gray, Ian Linklater, Craig Taylor, Robert Hutchison, Lee MacPherson, Roy Foubister, Ryan Tulloch, Jamie Marwick, Alan Pirie, Jason Cook, Nicol Gray, Derek Ward, Andrew Rendall, Billy Ward (two), Jim Hamilton (two), Davy Henderson (three), Erlend Ritch (three) and Ivan Leslie (four).  Neil Drever had a score of 171, whilst Ian Findlay scored 177.
High checkouts were hit by:  Stevie Linklater 100, Aaron Mitchell 100, Craig Moar 100, Davy Henderson 100, Lee MacPherson 108, Stevie Moar 109, Brian Moar 110, Steven Low 110, Brett Dickinson 111, Jason Cook 111, Colin Kirkpatrick 114, Keith Brumpton 120, Stevie Garner 122, Paul Foubister 128, Erlend Ritch 150, Ian Linklater and Trevor Shearer both caught the big fish, taking out a maximum 170 finish each.