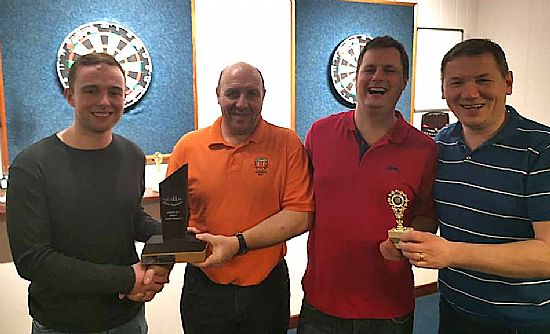 Jamie Drever is pictured being presented with the Under 30's trophy by KDDL vice-president Stevie Linklater, while Gary Wilson receives the runners-up trophy from league president Craig Taylor.

THE KIRKWALL Legion was the venue on Friday as 29 young players competed in the Under-30s Open Singles.
Organised by the Kirkwall and District Darts League, the competition is open to any players meeting the age criteria, with the trophy sponsored by Orkney Aggregates. Stevie Linklater provided a bottle of gin for the highest finish.
There was a good mix of KDDL players and players from outwith the league taking part on the night. Winner for the last two years in a row Erlend Lennie could not make it a hat-trick of wins, however, going out to Nicol Gray in the first round.
Making their way to the semi-finals were Jamie Drever who progressed into the final, beating Mark Shearer 4-2.
On the other board, it was Gary Wilson who went through 4-1 against Alan Findlay.
The final went the full distance, and the match was all square at 4-4 in the race to five.
In the last leg Jamie showed some real class, taking out a 127 finish on the bull to claim the title for the first time, also winning £72 prize money and the bottle of gin. Gary won £35 second prize from the money-in money out competition. The semi-finalists won £10 each.

The Kirkwall and District Darts League season entered its last quarter and there is still nothing decided yet at the business ends of each league.  'A' league leaders the Legion had their match postponed so it allowed the chasing pack a chance to catch up, which they all did.  The Commodores blitzed the Nomads, whilst Sanday recorded two thumping victories over both Wanderers and Untouchables 'A' to move clear in third, although the Golf Club remain close behind .  Wanderers week did not get any better with a decisive second half ensuring Untouchables took the spoils in their match, whilst the Bilco Boys resigned Quoyburray 'B' to yet another defeat.
In the 'B' league the Exiles finally lost their 100% record, as they were held to a draw in the Murray Arms, whilst Shapinsay closed the gap slightly with a win over Muppets.  The Young Loons closed the gap on the experienced Quoyburray side, who lost out to the resurgent Tigers.  And in the lower reaches it was Vikings who came out on top in their game with Sanday 'B', to draw level on points with them.

This Friday sees the League Doubles take place in the Legion and, although no longer a ranking competition, it remains one of the most prestigious competitions in the calendar and Stevie Linklater and Robbie Stanger will undoubtedly be looking to retain the title.  Then the following Friday is the big event for the 'B' league boys, with the 'B' league singles up for grabs in the Masonic.