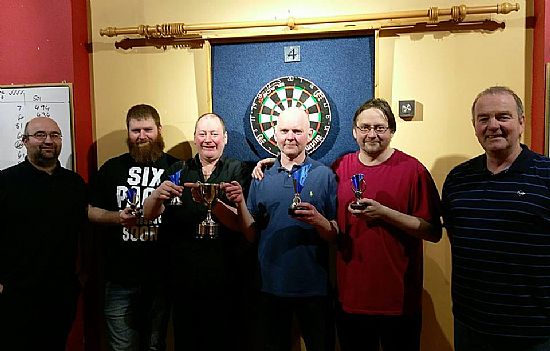 Stevie Garner and Brian Stevenson, centre, won the B league doubles, beating Dennis Watt and Karl Scott 5-0 in the final. Pictured at either side are KDDL committee members Brian Moar and Robbie Norquoy.

Another busy week in the KDDL, and it was the 'B' league boys who were involved in cup action this time, with the 'B' league doubles in the Masonic on Friday night.
Considering there are places on the plane to Shetland to play for, the entry of 13 pairs was a little disappointing, but those who are really keen were in attendance.
The night got off to a good start with Graham Rendall from Shapinsay hitting a 180 in one of the first legs, but there were obviously a lot of nerves on show as the doubling on the night was generally pretty poor.
In the top half of the draw, Brian (Tone) Stevenson and new Tigers' signing Stevie Garner made steady progress towards the Semi-final where Erlend Ritch and Kevin Sarling were waiting.
Double trouble was the order of the day once again, with the match eventually being taken to 3-3 where there was a short intermission for a toilet break, and possibly some T for the vicar!  Erlend narrowly missed tops on a 105 finish with Tone requiring 130, and he rolled back the years in style, hitting the bull dead centre to put them into the final.
Nicol Gray and Steven Low had been somewhat fortuitous to reach the semi-final, having had match darts against them in the previous rounds, but their luck ran out against the strong Exiles pairing of Dennis Watt and Karl Scott.
The Young Loons were first to the double in 6 of the 7 legs, but it was Dennis who secured passage to the final by hitting the double.
The final was somewhat of an anti-climax, given that a close match was expected.
Stevie Garner was in top form in the final, easily the best player on show, hitting high score upon high score, and Tone was playing steady and finishing with aplomb.
Birthday boy Karl had perhaps enjoyed his day a bit too much by this point, and Dennis was not showing his usual form, as Tone eventually hit the winning double to seal the match 5-0.
Great to see a legend of yesteryear back enjoying his darts and playing well, and it obviously meant a great deal to Tone to pick up some silverware.