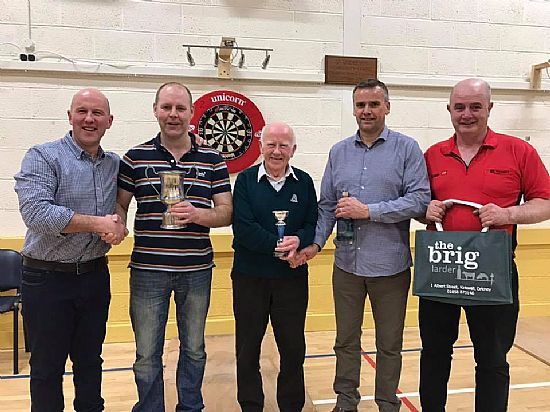 The Tankerness Hall was the place to be last Friday night for the fifth of this years Ranking Cup competitions as the Craigie Cup took place.
Much hard work from Robbie Norquoy and the local lads had been put in preparing the venue and it was in excellent playing order.
With sponsors Thorfinn and Eddie Craigie in attendance and putting up sandwiches, prizes for the winner, runner-up and highest checkouts for both 'A' and 'B' players, there was an added incentive for everyone to perform, and perform they did.
There are always some cracking first round matches, and when Ian Linklater paired against Derek Firth it was always going to produce great darts.
Ian missed a few doubles, but Firthy did what he does best and took out 152 under heavy pressure to win the game, and eventually took the 'A' checkout prize with it.
Almost immediately, Karl Scott from the 'B' league checked 157 in his match with Ryan Wilkie to claim the 'B' prize.
Notable performances on the night came from Darryl Robertson who reached the quarter-finals, as did Nicol Gray who put out Brian Moar and Paul Foubister on the way. Obviously the added incentive of a 'B' trip to Shetland this year was inspiring the lower league players to up their game.
Into the semi-finals, and it was two doubles pairings who found themselves playing against their partners.
Kevin Gray played Derek Firth in one of the best games ever seen in the KDDL. Kevin came from 3-2 down to win with 13 then 14 dart legs, with the worst leg in the match being 16 darts, tremendous stuff!
On the other board things were a bit more tense as Stevie Linklater and Robbie Stanger squared up. Once more it went the distance but with a dart or two missed at double from the 'Stoneman', it was eventually Robbie who progressed.
The final between Robbie and Kevin was a fairly one-sided affair, with Robbie just failing to hit enough trebles to put the pressure on.
Kevin raced to a 4-0 lead, only for Robbie to produce his best leg and claw one back. Kevin retaliated and clinched the final leg, and retained the trophy, with a terrific 13 dart leg in front of a sizeable crowd considering it had reached the midnight hour.

This Friday sees the 'B' league doubles take place, which also counts towards the 'B' ranking points table and the main ranking competitions continue the following Friday with the Taylor cup. 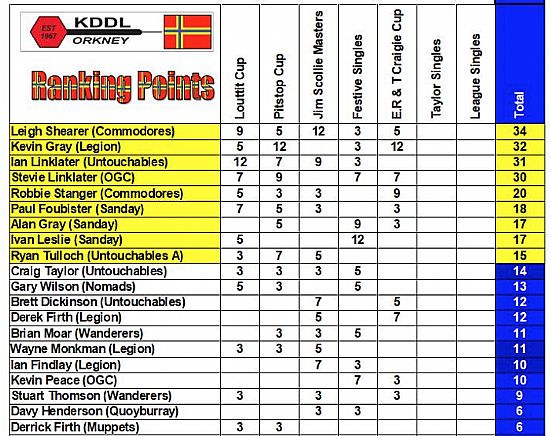