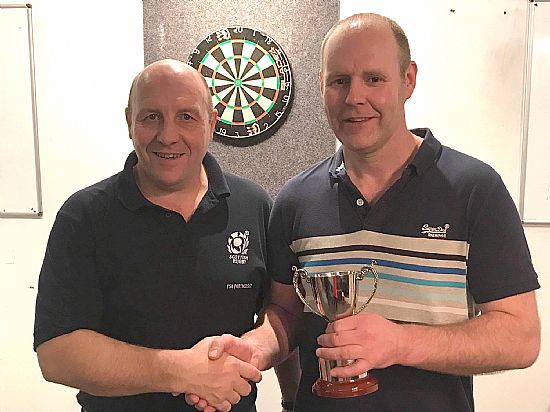 With a quarter of the league matches completed in the KDDL schedule, the leagues are beginning to take shape.  In the 'A' league, the top four teams most would have predicted all had good wins and now occupy the top slots.  Below them, Wanderers fought back to share the points with Untouchables and Bilco Boys had a crucial win down in the depths of the league against Quoyburray 'B'.

In the 'B' league the two new entries this year, Exiles and RBL2, occupy the first two positions, with the two relegated teams from last year, Shapinsay and Quoyburray, in third and fourth respectively.  Sands and Young Loons played out a stalemate, whilst Sanday 'B' scraped past the Vikings.

The second of this years ranking points events took place on Friday in the Orkney Golf Club, attracting a decent entry of 40 players.  As usual with so many entries, there were some mouthwatering early ties, with some big names falling early on.  The semi-final line-up included some familiar names, with Kevin Gray beating Ian Linklater 4-1, and Stevie Linklater beating Ryan Tulloch without reply.

It was fitting that the best two players on the night contested the final, and what a final it was.  Kevin raced into a two leg lead, courtesy of back to back 15 darters which included a 156 finish.  Stevie pegged back the third leg before Kevin took the fourth. At this stage the averages were almost TV standard, with Kevin on 103 and Stevie on a very respectable 80.

Missed doubles from Kevin and a resurgence from Stevie, saw the scores level again at three all and it really was anybody's match at this point.  The darts became a little nervy as Kevin pinched the seventh leg.
Then a narrowly missed dart from Stevie at double 16 on a big finish left Kevin to mop up double tops, which he did with aplomb.

A great final for the spectator, with final of averages of 77.96 (Kevin) and 75.82 (Stevie) only dipping at the end as the finishing line came in view.