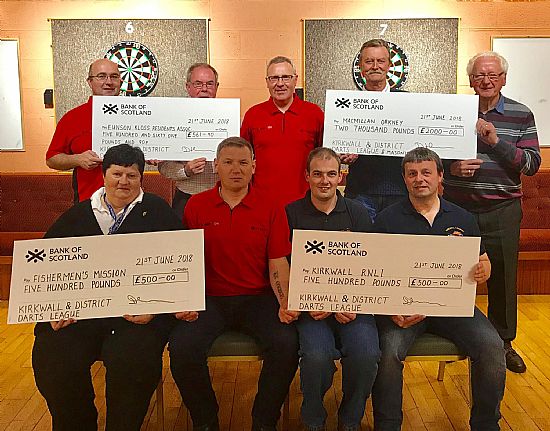 Kirkwall and District Darts League carried out its annual charity cheque presentations which saw a total of £3,561 donated to local good causes.

Brian Moar, David Henderson, and Craig Taylor from the league presented Marcus Vile and Kevin Wooldrage from Kirkwall RNLI with £500, Kirsty Sinclair from the Fishermen’s Mission with £500, and Jack Mcintosh from Eunson Kloss Residents Association with £561.90.

John Muir of Orkney MacMillan House was presented with £2000, which was raised between the league May weekend charity darts, and a gin tasting night organised by the Kirkwall Masonic recreation club chairman Mark Wroath, also pictured. Huge thanks once again to everyone who came along and supported the events throughout the year.

Darts league president Craig Taylor said: "Huge thanks once again to all everyone who came along and supported our charity events throughout the year. It is always a pleasure for the league to support numerous local good causes and carry out the cheque presentations at the end of each season."