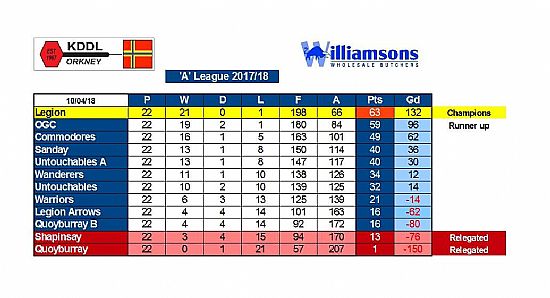 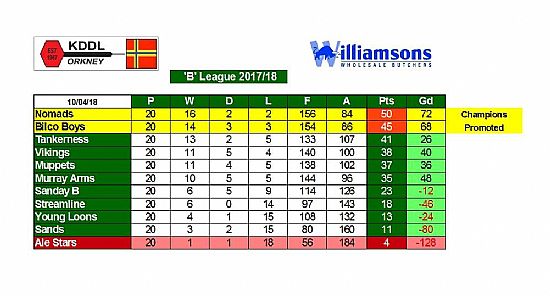 After 22 match weeks the KDDL leagues sponsored by Williamson's Butchers have now reached their conclusion.

Having already wrapped up the 'A' title the previous week, the Legion almost came unstuck against a plucky Untouchables 'A' side.  However, a hat-trick of big finishes each from the dynamic duo of Kevin Gray and Derek Firth saw them take the three points.

A similarly close match was played out in the Masonic where the golf club just beat Sanday to the spoils.

The Untouchables have had a fairly unlucky season, losing key players along the way, due to work commitments and injury, and on Wednesday bad luck struck again losing a player shortly before their match with the Warriors.  Credit to the Untouchables for playing out the fixture with three men, but ultimately it was the Warriors who emerged triumphant, with clinical finishing by Stevie Moar once more their trump card.

Shapinsay were heavily beaten by the Commodores so Quoyburray 'B' were already safe going into their game with the Arrows, and only a whitewash from them would send the Arrows down, while an 11-1 defeat would leave Shapinsay facing a play-off with the Arrows.

The teams locked horns on Monday, with the Arrows getting the two games they needed in the first two doubles, before strolling on to an 8-4 win.

The Nomads already sealed the 'B' league title last week, but their match with Tankerness was to play a pivotal role in who the other team to be promoted would be.

As it turned out, the champs pulverised their visitors and secured second spot for the Bilco Boys, who turned over the Ale Stars the following night anyway.

Tankerness redeemed themselves by beating Sands, while the Muppets had the narrowest of wins over Vikings.

With the Murray Arms already having played a previous match with three players, and nothing resting on the game, they were reluctantly allowed by the committee to concede their match with the Young Loons.

Due to circumstances outwith their control, Streamline were unable to complete their two remaining matches and forfeited both. An unfortunate end to what has been a really exciting 'B' league this year, with the standard continuing to rise and some real young talent beginning to emerge.

On Friday the Steven Flett Memorial Mixed Doubles takes place in the Legion. Names by 7.30pm. Enter with a partner.

The following week the men’s and ladies teams head to Lerwick to take on Shetland in the annual clash  between the sides, with the reds having eight-in-a-row in their sights.