Time is starting to run out in the KDDL leagues as the Legion continue to close in on their 9th title in a row, defeating Sanday 9-3.
The Golf Club produced a similar result over Wanderers to remain in pursuit, as did Commodores over Untouchables 'A'. The Untouchables whitewashed bottom side Quoyburray and in doing so virtually guaranteed themselves a top half finish.
Down near the bottom of the table Quoyburray 'B' and Warriors played out a draw, which may prove a valuable point for both sides.
The Arrows crunch game with Shapinsay was postponed but the Arrows did well to play out two other games in the week, going down 9-3 to Sanday and 8-4 to Untouchables 'A'.

This means that the Arrows and Shapinsay now sit exactly level in the fight to avoid the second relegation spot, putting even more importance on their clash when it is rearranged.
Meanwhile in the 'B' league, league leaders Nomads pulled further away from the pack with a narrow 7-5 win over Streamline.
There were three draws this week, and two of them could have a bearing on the promotion race.
Second placed Tankerness drew with third placed Murray Arms, whilst fourth and fifth in the guise of Vikings and Bilco Boys could only do the same. Despite that, all five teams remain in contention.Elsewhere Sands held Sanday 'B' to a draw while Muppets had a good win away to the Young Loons. 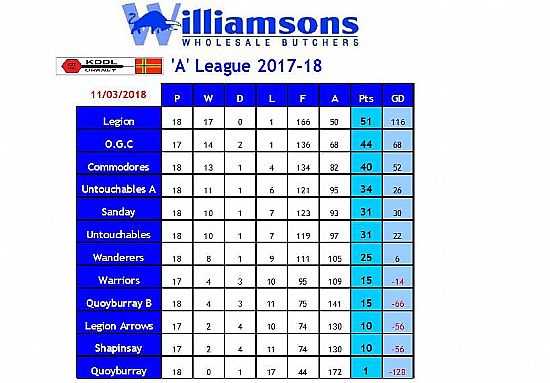