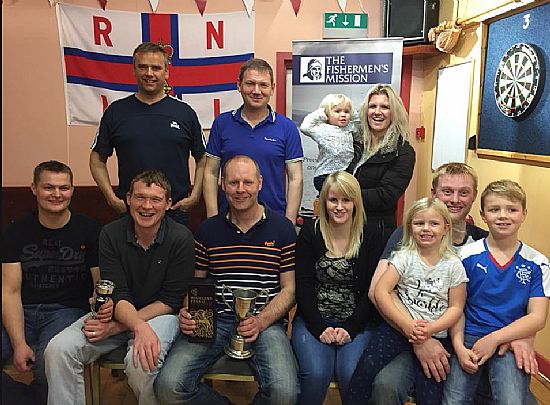 An amazing £1000 was raised to be split between the RNLI and the Fishermen's Mission on Saturday when the KDDL held the annual Davy Cooper Memorial Darts competition.
49 men and lady players entered the open singles event which took place in the Kirkwall Masonic Club.
In the main event, by semi-final time, Stuart Thomson beat Andrew Skea to reach the final, while Kevin Gray put an end to Craig Taylor's hopes of reaching the final for the second year in a row.
On to the final, and Kevin continued his good form by taking the title for the third time with a 4-0 win over Stuart.
Money was raised on the day from a bottle stall, a coin push, and prize boards. The KDDL as always, donated all the entry money to the charities as well.
On behalf of the committee, league president Craig Taylor said that a huge thank you goes to everyone who took part in the event and generously donated the numerous prizes on the day.
The RNLI and the Fishermen's Mission are just two of the charities which the league supports, and a cheque presentation will be arranged later in the season.

Week 5 of the Williamson’s Butchers KDDL ‘A’ and ‘B’ leagues came and went, with the resulting league tables proving just how close and competitive both leagues are.
The Legion remain top of the ‘A’ league and maintained their 100% record with a thumping 11-1 win over Quoyburray.
Untouchables held onto second spot with a narrow but deserved 7-5 win over Wanderers, who had previously been in third.
Despite the Arrows’ Graham Firth posting more big scores on their card yet again this week, it wasn’t quite enough to match the firepower of Trevor Shearer and Roy Foubister as Untouchables ‘A’ won 10-2.
The Golf Club also won 10-2 in a rescheduled and reversed fixture against Shapinsay, while Sanday overcame Quoyburray ‘B’ 8-4 with Sanday skipper Michael Muir nailing a 12 dart leg.
With only 6 points separating first from sixth, and only game difference coming into play between third and sixth it shows just how close it is in the top half this year.
It is also worth bearing in mind that the Commodores still have a game in hand and will no doubt be hoping to be in that mix before too long.  The bottom half is equally as tight with only three points between the bottom five clubs.

And for all that the top league may appear close, the ‘B’ league boys seem intent on being even more competitive, with three teams now on 12 points at the top and a further two teams within three points of that.
The Bilco Boys drew with previous bottom team Sands last week, and this week they held the second placed Nomads to a draw.
Despite Nomads Gary Wilson scoring yet another 180 to sit top of the KDDL 180 leaderboard on 9, John Thomson managed to post an impressive 13 dart leg for the visitors.
The Muppets came from 4-2 down at half-time to previous leaders Tankerness to win 7-5, with Darryl Robertson and Derrick Firth playing great darts for the Muppets. That result saw Muppets leapfrog Tankerness into second place by virtue of game difference.
Murray Arms once more sit top of the pile courtesy of a huge game difference, helped in no small part by an 11-1 victory over Ale Stars, with Murray’s Grant Harrold hitting the highest finish of the KDDL season so far with a 156 checkout.
Elsewhere the Vikings kept themselves in serious contention with an 11-1 win at home to the Sands to sit fifth but with a game in hand.
Streamline had a reasonably comfortable 8-4 win over the Young Loons to put themselves in the mid table spot.
On Friday the next ranking points competition takes place in the Orkney Golf Club, it is the Pit Stop Cup with names due in by 7.30pm on the night.