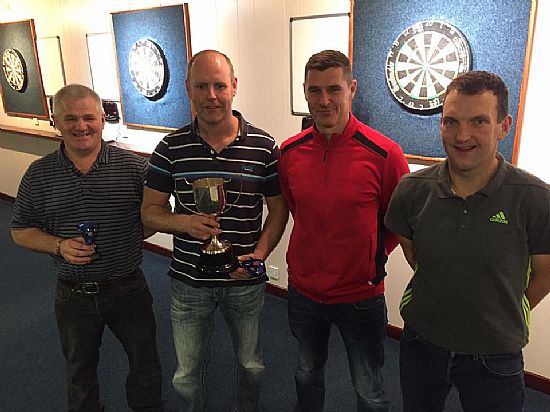 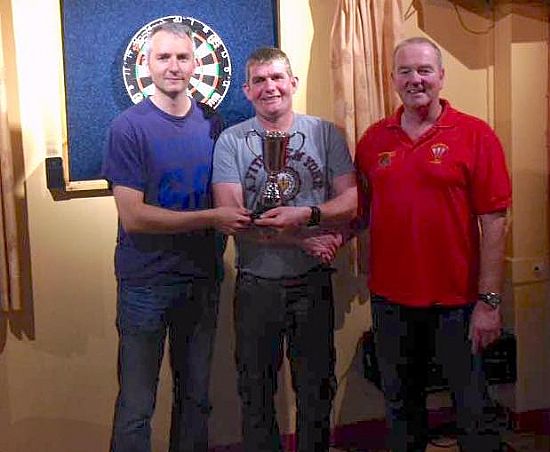 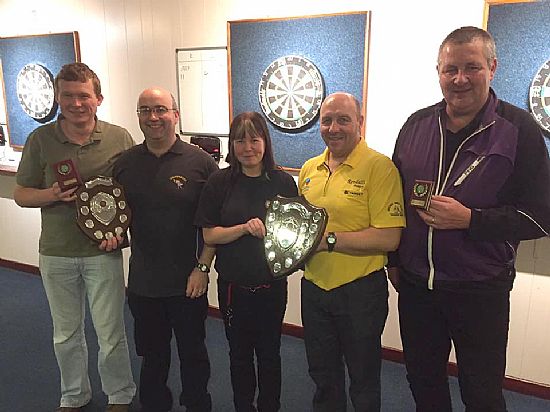 Pictured are the trophy winners from the Cricket singles and doubles, with Kelly Harcus from the Kirkwall Legion which hosted the competition. From left, doubles winners Stuart Thomson and Brian Moar, Kelly Harcus, singles winner Stevie Linklater who also lost in the final of the doubles, with partner Kevin Peace. Missing from the picture is singles runner up Kevin Gray.

The cup fixtures continued last week, with a week of Cricket Cups.
On Monday night in the Legion, seven teams entered the A League Lynnfield cricket cup. The Legion came out on top beating Untouchables A in the final 3-1.
Wayne Monkman hit a 180 for the Legion with Shapinsay's Colin Leslie hitting 3 bulls on the night.
On Tuesday night, it was well done to the Bilco Boys on winning B league 301 Cricket Cup beating the Muppets in the final. A good entry of 18 teams entered.
On Friday night the Cricket singles and doubles took place in the Legion.
Doubles winners were Stuart Thomson and Brian Moar who beat Stevie Linklater and Kevin Peace 2-0 in the final. Singles winner was Stevie Linklater who beat Kevin Gray 2-0 in the final.
There were 180's on the night from Gary Wilson, Kevin Peace, Jim Brown and Brian Moar. 24 players entered the singles, 12 pairs in the doubles.

With the league set to start this week can all teams make sure that they post a clear readable picture of the scorecards (front and back) after the games and post them on the Orkney Darts Facebook page. That way the league tables can be updated and posted online. ALL cards can then be left at the Kirkwall Legion by Noon on Saturday where they will be collected.

There is no cup fixture this Friday. The next one is Friday October 13, with the first of the ranking points competitions, the Loutitt Singles, played in the Legion. Names by 7.30pm.