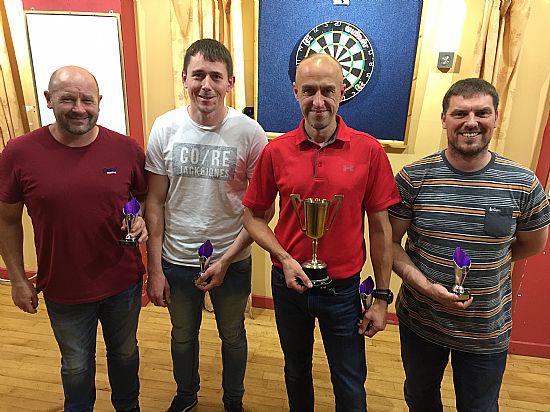 Untouchables A were winners of the Spiers Cup. Pictured from left are Roy Foubister, Ryan Tulloch, Colin Barnett and Trevor Shearer.

Eleven teams entered the Spiers Cup last Monday night, with the high standard of darts on display a talking point, especially so early in the season.

This, the second cup competition of the season saw 13 180's scored and 7 ton plus check outs. The highest finish of the night was a 129 scored by Stevie Linklater, with Billy Ward hitting two 180's on the night.

This is the first year that the competition was switched from 1 leg 0f 601 to best of three 501, with the new format seemingly proving popular, and certainly taking out some quality darts in the Kirkwall Masonic.

It was unfortunate that in the first round of the competition that the Legion team had to withdraw due to illness. However, making their way to the semi-finals, in the top half of the draw were the Commodores - chasing their second cup of the season - against the Orkney Golf Club.
It was the Commodores proved too strong and ran out 4-1 winners.

In the lower half of the draw Untouchables A beat Sanday by the same scoreline, booking their place in the final.
And what a final it was, after the four singles and two doubles it was all even at 3-3 with the game going down to the one leg 601 decider. It could not have been closer.

As the scores quickly came down Commodores Robbie Stanger just missed double 11 for a 99 check to take the title, but up stepped Roy Foubister to check out an impressive 120 and win the cup for Untouchables A.

Monday, Sept 18, the Lynnfield Cup takes place in the Legion for A teams, and the Foubsiter Cup is held in the Masonic the following night for the B league. Team names in by 7.30pm.