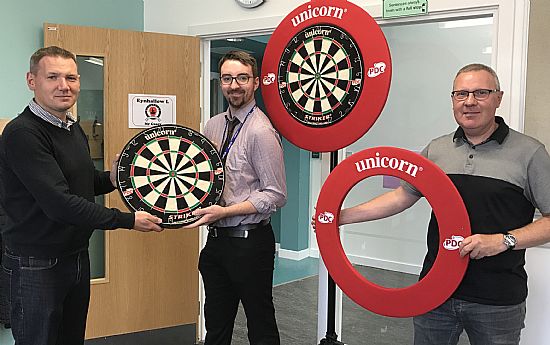 Craig Taylor, left, and  David Henderson, right, from Kirkwall and District Darts League are pictured handing over the darts equipment to KGS teacher Paul Casey. It is hoped that pupils will take an interest in taking up the sport.

Pupils at the biggest school in Orkney are to be introduced to darts following a donation of equipment from the Kirkwall and District Darts League (KDDL Orkney).
Talks on the possibility to introducing the opportunity to play darts at Kirkwall Grammar School took place shortly before the summer holidays.
Now, with the new term beginning, league president Craig Taylor and treasurer David Henderson recently presented class teacher Paul Casey with two free-standing darts set-ups, including stands, boards, surrounds and mats, as well as darts and other equipment.
The presentation of darts equipment from the league was also backed by league secretary Jim Scollie who kindly donated two sets of brand new tungsten darts to the school.
Darts manufacturer Unicorn also kindly donated darts, flights and shafts, after being happy to support the initiative when contacted by Craig.
Mr Casey now plans to start running weekly darts sessions at KGS, and hopes that there will be a great deal of interest from pupils in playing the sport.
In turn, KDDL Orkney eventually hope to see younger players coming through to play the leagues as they get older, as at the moment only those over 18 can play in the venues.
The idea for approaching the school came after a friend of Craig's in Wick, Hugh Duncan,  told him how youth darts is now booming in Caithness having been introduced in high schools in both Thurso and Wick.
As well as being popular in the two schools, Hugh and his wife Lynne now also both coach youngsters involved in the Caithness Youth Darts set-up which they established, some of whom have been very successful in competitions further south against top opposition.
On behalf of the league Craig thanked the school and Paul in particular in showing such an interest in darts, and hopes that the venture is a success, adding that with so many darts competitions on TV these days, the sport has seen a huge growth in popularity in recent years.