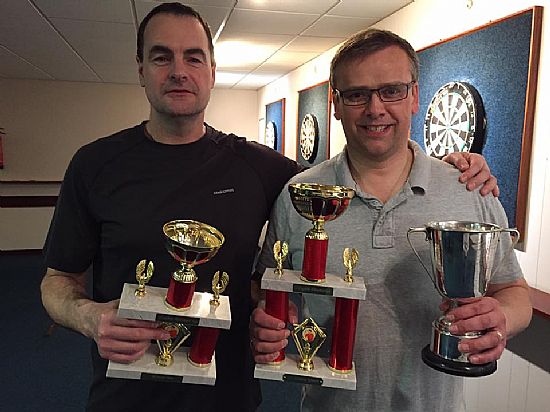 Well done to both finalists in the league singles. Robbie Stanger beat Ivan Leslie 5-2. Both players have had a great season. It's 22 years since Robbie last won the trophy. Rob averaged 78.12 Ivan 76.15. 48 players entered with 16 180's scored.

The last of the ranking point events was a great success as 48 players contested the League Singles. All the main contenders were there and with points vital to many players there were the usual upsets.

By the quarter-finals there were six ‘A’ players and two ‘B’ players, who beat some of the top ‘A’ players en-route.

The cup holder, Derek Firth, went down to Robbie Stanger in the semi-final having missed nine darts at a finish, setting up a Robbie v Ivan Leslie final.

It was fitting that the two players who had dominated the singles and doubles events all season should clash in the final and it was a classic between the two on-form players.

The score of 5-2 for Robbie gives the impression that it was one-sided, however the averages say different with Robbie on 78.12 and Ivan on 76.15. Sixteen 180s were scored.

It’s now on to the annual East v West game which is Friday night in the Stromness Golf Club. The bus leaves the Kirkwall Legion at 7pm and returns at 11.45pm.

Champions-elect the Legion require only one point from two games after beating the Untouchables 9-3. The Commodores are the only side that can still win the title as they beat the Golf Club 7-5, a result which sees the Golf boys drop to fourth. Sanday moved up to third with a 10-2 defeat of relegation-threatened Quoyburray ‘B’, who are level on points with the Sands ‘2’. The Legion Arrows are one point better off.

The Wanderers played twice, taking a point of the Untouchables in a 6-6 draw but going down 9-3 to the Warriors who have done well in their first season in the ‘A’ League.

Have Quoyburray blown their chances in the Williamsons ‘B’ League? They lost 8-4 to the Bilco Boys but they did end Tankerness's chances with a 9-3 win but the team to catch is Shapinsay. A win against the Quoyburray would seal the title.

They beat the Motorhoose 8-4 and my apologies to the Nomads — I have them the wrong points total last week — they are very much in the hunt for at least runner-up spot after a 8-4 defeat of Tankerness.

The Vikings put an end to the Murray Arms’ hope with a 8-4 win out in the ‘Hope. There were very good points for the St Ola boys with an 8-4 win over the Muppets. The Motorhoose defeat gives them second bottom spot behind the St Ola ‘B’.

Following the selection meeting, the KDDL Orkney team to play Shetland on April 21 here in Orkney is as follows. This is also the East A team:

There have already been some notifications of players unavailiable for the East v West already. Please inform captains so that reserves can be brought in.