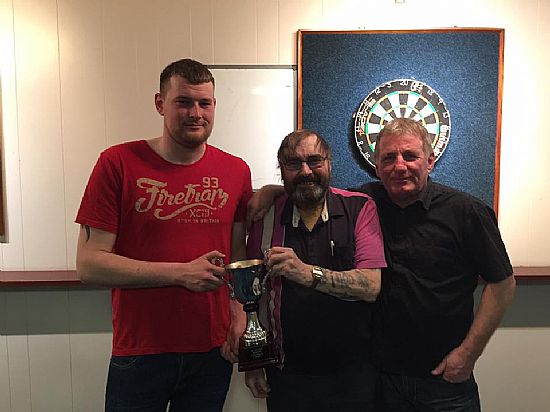 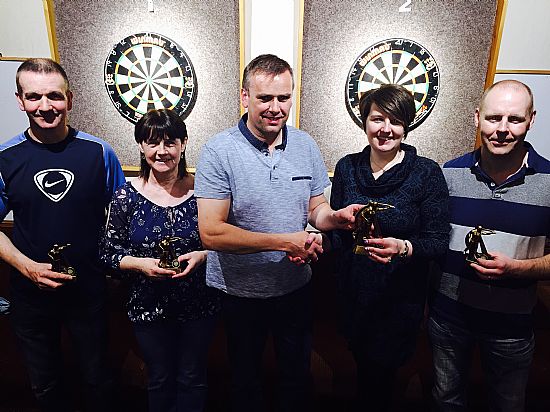 The first ever KDDL / L-KDDL mixed doubles competition was played on Saturday night in the Masonic Club in Kirkwall.
The winners of the competition  were Kevin and Shona Gray, who beat Michael Muir and Irene Thomson in the final.
As well as winning the title, they will go on to play the winners of the West Mainland Darts League mixed-doubles competition later in the year, competing for the title of Orkney mixed-doubles champions.

A good turnout of 30 ‘B’ players entered to contest the ‘B’ league singles, the last of the ‘B’ ranking points events, that is about 50% of the registered players.
All the top players were there and some didn’t make the points level and by the quarter final times, it was a fair mix of team still in contention.
There were three from Nomads and one each from the Vikings, Bilco Boys, Shapinsay, Muppets and St Ola ‘B’.
In to the semi-finals marched Brett Dickinson and Matthew Wylie from the Nomads, Brian Murray of the Vikings along with Jamie Marwick of Shapinsay.
After two very good semi-final games, Brian Murray and Brett Dickinson faced off for the final and it was Brett who came out as the champion with a 5-1 scoreline.

At present, Brett is nearly untouchable, so the ‘B’ ranking table is Brett Dickinson, 29 points; Jamie Marwick, 20; Brian Murray, 19; Derrick Firth, 12; Derek Manson, 11; Matthew Wylie, 10; Gary Wilson, 10; Davy Henderson, 9; Robbie Norquoy, 9; Mark Shearer, 9; Andrew Moar, 9 and Allan Brown, 8. These points are only from three ‘B’ ranking points events, other points gained in ‘A’ and ‘B’ ranking points are still to be added and this year the ‘B’ East v West games will be with 12 players each side, up until now, it has been eight-a-side.

Are any team going to get near the Legion in the Williamsons ‘A’ League?
They are now ten points clear of the Commodores after a 10-2 win over the Legion Arrows and another three wins in the remaining matches will make sure. The Commodores do have a game in hand after their no game week. Another of the challengers are the Golf Club are now out of contention after going down 7-5 to the Warriors who have done very well in their first season in the top league. Sanday who were expected to be one of the contenders won 11-1 away to the Untouchables ‘A’ but cannot now get enough points so it’s really down to one team. Quoyburray ‘B’ have found it hard going in the ‘A’ league but they did pick up one point by holding Sands 2 to a six all draw in a postponed game but went down 10-2 to the Untouchables. The Sands also had a second game but came unstuck against the Wanderers to the tune of nine games to three, which that score should keep Wanderers safe for another year. I think the fight for the wooden spoon is down to the Sands and Legion Arrows and they play each other next week.

It’s too close to call in Williamsons ‘B’ League as all three contenders had big wins. Leading the way, Tankerness kept their top spot with an 11-1 win over the pointless St Ola ‘B’ boys. Level at the top, Quoyburray, ended the Vikings hopes with 8-4 win and Shapinsay completed the trio by beating St Ola 9-3 but all three have still to play each other so it’s far from over. The St Ola team will be battling out with the Motorhoose for the second bottom spot but no result from the Nomads game. The Bilco Boys had to share the points as the Muppets held them to a six all draw.

It’s the big one this Saturday with the KDDL holding the JW Gray Tennent's Kirkwall Open. It’s in the Masonic with names in by 1.30pm. Players from Shetland and south are expected with £1,000 on offer, and there are special prizes for the top lady and top ‘B’ player registered with the KDDL.
Next Friday its back to ranking points with the league doubles in the Masonic, names in by 7.30pm.