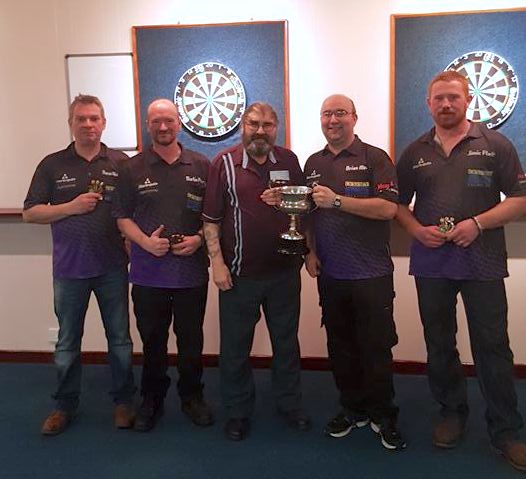 Eight teams entered for the Royal Cup played for in the Legion, five ‘A’ teams and three ‘B’ teams made up the entry.
At one time this cup had to be played over two nights as all the teams used to play but those days are over, however, the standard  of darts was is still as strong as ever.
Two of the ‘B’ teams clashed in the first round and was won by Shapinsay over the Tankerness boys. The other ‘B’ team, the Nomads, went down to the Wanderers.

Sanday the defending champs showed they had no intention of giving up the crown as they thumped the Legion 4-1.
Joining them in the semi-final was the Untouchables, winners over the Legion Arrows. Two cracking semi-finals saw the Wanderers win along with Sanday in the final.
In the final, the Wanderers proved too strong for Sanday as they ran out 4-2 winners.
180s from Aaron Mitchell and Gary Wilson.

It’s now back to league darts as both get underway on Monday with the reverse fixtures. In the Williamson ‘A’ league it looks like it’s down to only three teams who are within four points of each other as the Legion leads the Commodores by three points with the Golf Club a further one point adrift. Then there is a gap of seven points but that could all change as the Legion take on the Commodores in the first game.

At the other end it looks like a fight between three teams as only two points cover them. It’s also very tight in the Williamsons ‘B’ league as only three points cover the top four with Shapinsay in pole position. St Ola ‘B’ is the only team still to score a point.

It’s getting close now for the first of the 50 years celebrations and it’s on Saturday, February 11 with Golden singles and it’s for a gold cup. The event will take place in the Legion and it is open for any players, male or female, who have played for a league team in the Kirkwall leagues - names in by 1.30pm.