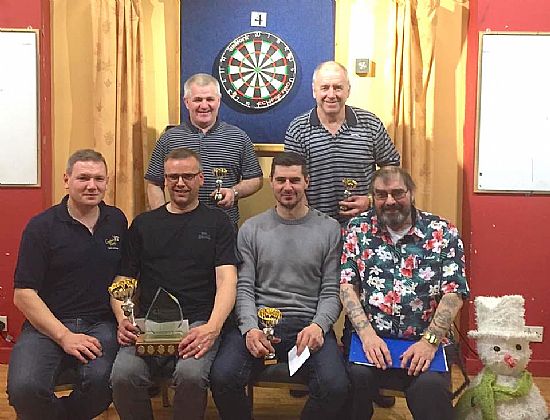 Robbie Stanger retained the KDDL festive singles at the weekend, beating Wayne Monkman 5-1 in the final. Robbie won the title and £100, with Wayne £50. They are pictured in the front row along with KDDL president Craig Taylor, left, and league secretary Jim Scollie, right.
In the back row are semi-finalists Ian Findlay and Alan Gray, who won £20 each.

The last ranking points event of the first half of the 2016/17 season  attracted the biggest entry of the season as 63 players came forward mostly from the KDDL but there were three brave young ladies and a few from the North Isles but none of them figured in the points section.

Some big names didn’t make the points. By the quarter final stage all 8 players were from the KDDL and included the defending champion, Robbie Stanger and he had no trouble making it into another final. In the top half, the Legions, Wayne Monkman was making short work of the opposition as he stormed into the final but Robbie had no intentions of giving up his title and retained it with a 5-1 win in a final rightly called a classic. The score looks very one sided but it was far from it. Robbie appeared to be one throw ahead each leg as his average throw was 84. Wayne was a little behind on 74.37 but great darts all night long.

The Legion are back on top of the Williamson’s ‘A’ League as they thumped Quoyburray ‘B’ 11-1, now two points clear with a game in hand. The big surprise of the week was the two points lost by The Commodores as the Wanderers held them to a 6 all draw. The surprises didn’t end there as there was a first win of the season for the Sands ‘2’ with a 8-4 defeat of the Untouchables. It didn’t take them out of the relegation position but must give them a boost.  Level with the Sands at the bottom are the Legion Arrows who went down 8-4 to the Warriors. Sanday also lost more ground losing out 7-5 to the Golf Club.

In the Williamsons ‘B’ League , Tankerness arein top position after playing two games drawing 6-6 with the Nomads and beating St Ola 7-5 and they still have a game to play as does quite a few teams in both leagues. The Nomads also played twice and they drew the other game with Quoyburray who drop down to second spot. It was a good week for the Vikings as they drew with Shapinsay and beat St Ola 9-3. The only other game also ended as a draw 6-6 between the Muppets and The Motorhoose. No score in from the St Ola ‘B’ and the Murray Arms.  Remember all the postponed games must be played by the end of December or the committee will decide the outcome.

That’s it for the first half of the 50 Season of the KDDL. Darts will resume on Monday, 9 January so may I wish all the committee and players a very Merry Xmas and a Happy New Year.

Ben Hogan won first prize in the festive raffle. Derek Ward jnr won second and 20 other prizes were spread all over Orkney. A big thank you to all ticket buyers and sellers.