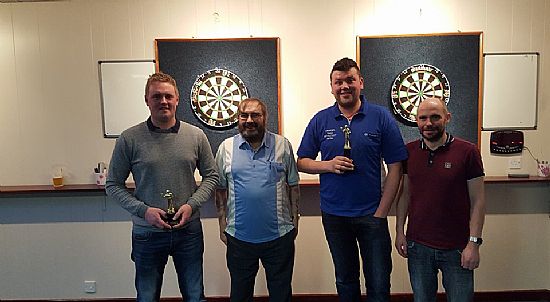 A very good turn-out of 30 young players put their names down for the under 30 Open Singles. Half of them came from Sanday and the West Mainland and there were some big named players from the KDDL.

Right from the off there were some great games with some of the more fancied players going out.

Top game saw the repeat of last years finalist between defending champion Ryan Tulloch and runner up Michael Moodie with the result reversed as Michael won and made his way to the final, in the other half Graham Flett was playing well as he made the final, and he took the first leg before Michael changed gear and with some great finishing took the title 4-1.

In the Williamson's 'A' League there's no change at the top as all the contenders won.

The Commodore beat the Untouchables 7-5 to keep their two point lead over the Legion who increased their games for difference with a 10-2 defeat of the Sand 2 who are still not clear of the relegation zone but still in bottom spot and still without a win are the Nomads after they went down 9-3 to the Wanderers.

The Golf Club kept up the pressure at the top with a 10-2 win over RBLM. The Legion Arrows picked up a very welcome point by holding the strong Untouchables 'A' to a six all draw, Sanday are not giving up the hope of the title with a 10-2 defeat of second bottom St Ola.

The Williamson's 'B' League boys got underway after the festive break and there's no change at the top as undefeated Warriors saw off the Muppets 8-4.

No result in from second placed Quoyburray 'B' v Shapinsay so it gave the other Quoyburray team the chance to move up but they only drew 6-6 with Tankerness. The Masonic beat The Vikings 9-3 and they also are still without a win this season.