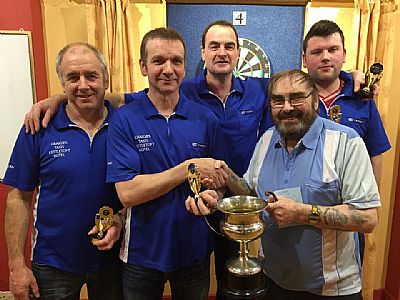 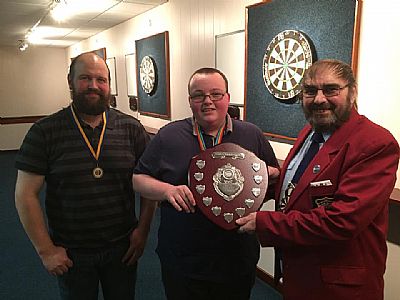 The second of the A and B team cups, the Royal Cup, only got 11 entries and all from the 'A' league, no entries at all from the 'B' league and that's the first time there's been no 'B' entries for combined A and B competition.The only 'A' team missing was the Legion Arrows.
There were some terrific games with a lot of them going to the play-off games.
The Golf Club, the holders, went out early to the Wanderers, who also went out to Sanday who made the final, and for the second year running the Commodores made the final, but as of last year had to be content with runners-up spot, as Sanday won the play-off for a 4-3 win.

The 'B' boys got their first go of the New Year as 21 players entered the Albyn Video Games Singles Shield. Some very good and exciting games before the two finalists were decided and it was Mark Shearer who faced Colin Leslie with Mark coming out a 4-0 winner with some great finishing.

So it's all out to Quoyburray for the next ranking points event, the E R & T Craigie singles.

180's from the two cup games from Billy Ward, Roy Foubister, Ivan Leslie, Michael Moodie, Alan Gray and 2 from Stuart Thomson and Mark Shearer. Brian Murray had a 177 and Ivan Leslie had a 16 dart 601 leg.

The Under 30's singles in the 6th February is an open event for player's male or female who are aged between 19 and 29.

The 'B' league gets underway on Monday and it's close at the top with the Warriors holding a 3 point lead over Quoyburray 'B' with the rest quite some way a drift but there's a long way to go.

Team captains are reminded to leave score cards in the Legion Club by 12 noon on Saturdays.