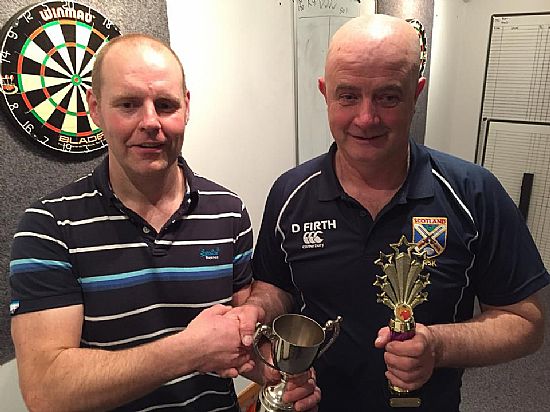 Another great night of darts and great darts as 40 players ventured up to the Golf Club for the second ranking points event of the season, the Pit Stop singles.

26 'A' players and 14 'B' players featured but only 3 of the B boys make the points scoring section and by the quarter time, Paddy was the only one left, the other 7 very familiar names and included the defending champion Kevin Gray and he made the semi final to meet Stevie Linklater. The other semi saw his doubles partner Derek Firth take on the surprise player of the night Ryan Tulloch.

After two very good games, it was Kevin and Derek who clashed in the final and clash was the word as the two Legion team mates shared the first four games in the best of seven final. Derek had led 2-1 but Kevin reeled of three legs on the trot, including the last leg which was as good as you would see on TV as Kevin took it in 11 Darts to win 4-2 and average 30.26 per dart in the final, Derek just over 26% per dart. A great final.

The Legion remain undefeated after a narrow 7-5 defeat of the Wanderers who also lost out 7-5 to Sanday and they also beat the Legion Arrows 10-2. Some if these games are postponed from earlier on.

The Commodore kept up the pressure at the top of the Williamsons 'A' League with 8-4 win over St Ola who along with The Nomads are stuck at the bottom. The Nomads had a another bad night being whitewashed 12 nil for the second time this season, this time it was the Untouchables who dished out the punishment and they remain level at the top. No result from RBLM v Sands 2 game.

Lots of games from the Williamsons 'B' League still out on top are the Warriors, 8-4 winners over Tankerness who drew with Quoyburray 'B' and lost to Shapinsay 7-5 who drew with Vikings 6-6. The Vikings also lost out to the Bilco Boys 8-4. The big game out East was saw Quoyburray beat Quoyburray 'B' 7-5 to move up into second equal. No score from the Muppets v Masonic game.

Big day this Saturday with the Davy Cooper Open Singles. It's is the Masonic, names by 2.30pm and it's open to both ladies and gent players over 18. Then next Friday is the cricket singles and doubles for both A and B players registered with KDDL, it's in the Legion, names by 7.3pm.