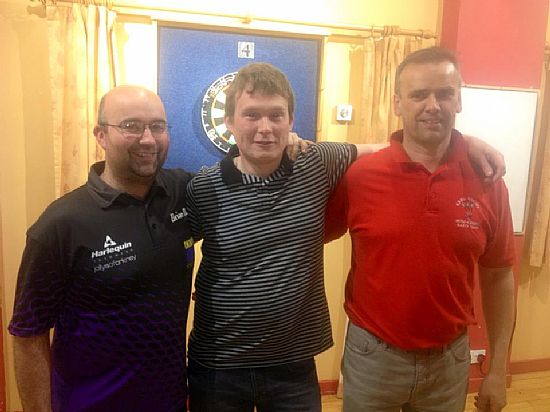 The first qualifying game to determine the players who will be playing the professionals didn’t attract a big entry as only 23 players came forward. Rather disappointingly, no female players competed, but most of the top players were present and nearly all from the KDDL.

With a small entry, some of the top players met early on and of course some went out, but by the semi-final it was all KDDL players who were left.

Robbie Stanger beat Brian Moar 3-2 and in the other semi-final, Stuart Thomson came out a 3-1 winner over Leigh Shearer. As three players were needed, both beaten semi-finalists met with Brian Moar beating Leigh Shearer 3-1.

In the final Stuart had no answer to Robbie’s power play and went down three nil, but all three qualify for Picky in August.

The next qualifying game is, Friday, in the Legion Club. Names by 7.30pm and remember it’s open to any player, male or female.

The final qualifying game is the next Friday, May 29, and is in the Royal Hotel, Stromness.

The week before, the Tattie Bogle Charity Mixed Doubles attracted 20 gents and 18 ladies and was won by Michael Muir Snr and Lizzie Irvine 3-2 over Brian Murray and Serena Skinner.

Registration books for the new season are now available from the secretary. Also three new committee men are required — names to the secretary.