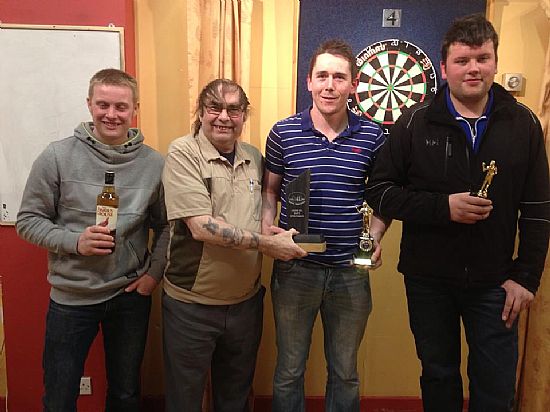 Thirty young players from all over Orkney came forward for the 18 - 30 Singles. It included 13 players not attached to the KDDL.

It was a highly contested start to the competition, with only three KDDL players making it to the quarter-finals.

Mal Reid of the West Mainland was the only one to make it to the semi-finals before he went down to Sanday’s Michael Moodie, and the B League was represented by Ryan Tulloch of Sands 2, who saw off James Flett in the other semi-final.

In the final, Ryan was on top form and beat a rather jaded Michael 4 - 1.

The battle for the highest finish, 145, went to Cliffy Cooper, and James Flett won the lucky tenner.

So it’s on to the B League Singles on Friday, in the Masonic Club – names by 7.30pm. It is for B League-registered players only.

Things are really hotting up at the top of the Williamsons A League, with three teams only separated by four points, but with Sanday and the Commodores faltering recently, it could be down to two.

The Golf Club still lead by three points after defeating the Commodores 7 - 5 – their second defeat on the trot – and Sanday were held to another draw, this time by Untouchables.

That allowed the Legion to move up into second place, with a 9 - 3 over Untouchables A.

In the “big game” in Quoyburray, both teams picked up points in a six-all draw.

There’s no change at the top of the Williamsons B League, as St Ola march towards the title, they are unbeaten after a narrow 7 - 5 defeat of Shapinsay.

Still in second spot are Legion Arrows after a very important 7 - 5 win over the Shore. The Bilco Boys had a good win over the Muppets, 9 - 3.