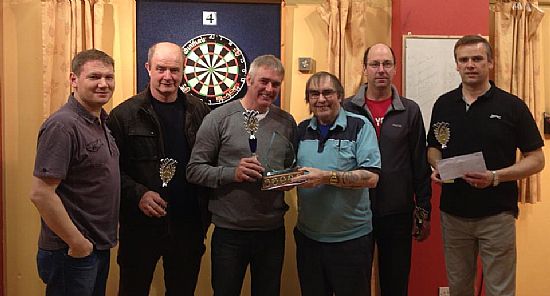 There was a record entry for the fourth ranking points event of the season — the Festive Singles.

Sixty-six players came forward from all over Orkney and as what happens when there’s a big entry top players clashed early on and were left with no points — one of them was the defending champion Stevie Linklater who fell at the first hurdle to Kevin Gray. In turn, he only managed to get to the quarter-final stage.

By that time it was only K-DDL players left and making the semi-finals were Ian Linklater, Simon Parry, Robbie Stanger ad Derek Firth, with Simon and Robbie making it to the final.

And it was a cracker going all the way to a final leg shoot out which Simon won to take the title 4-3.

The win takes Simon up to second spot in the table but Stevie still leads on 24 points with three events to go next year starting with the E. R. & T. Craigie Singles on January 23.

In the Williamsons ‘A’ League it was a week of big scores and leading the way was the league leaders the Commodores, as they inflicted another whitewash on the Sands ‘2’.

Twelve-nil was the score — the third time this season the Sands have been whitewashed.

The Golf Club just did enough to remain in second spot, winning the last singles match to beat Wanderers 7-5.

Close behind are Sanday, 11-1, winners over RBLM and Quoyburray have moved off the bottom by taking a point in a six-all draw with Nomads.

The battle of the Untouchables teams was won by the ‘A’ team 9-3.

That’s all the darts for this half.

Play will recommence on January 5 with the Swanney Cup in the Masonic.

There’s still some teams who haven’t paid their league entry fees, they must be paid before the start of the second half, if not points may be deducted, or the committee may be forced to take other action.