01 September 2014
Great day of darts at the Orkney Masters 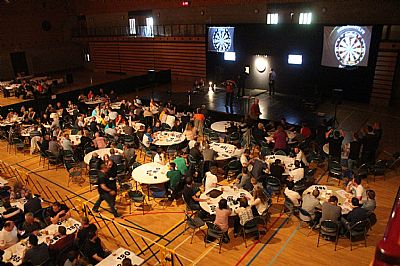 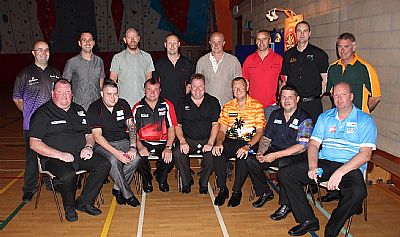 League secretary Jim Scollie’s report on the Orkney Masters, and a reminder that the Shapinsay darts takes place this weekend.

It was ‘magic’ — that’s the only word to describe the Orkney Darts Masters, played on Saturday, as seven professional players took on the elite of Orkney’s darts players.

Two of the Orkney boys played each other to make numbers even, and Kevin Gray beat Michael Bain 5-2.

But the star of the first round must be Ivan leslie, as he took out one of the top players — Terry Jenkins 5-4.

Ivan played out of his skin and came from behind to win, but fell at the next hurdle to John Henderson 5-0.

Kevin also went out 5-0 to Colin Lloyd, while Derek Firth played well to take two games off Wayne Mardle, but went out 5-2.

Robbie Stanger couldn’t stop Michael Smith, as he lost 5-0, the same scoreline as Paul Foubister fell to Colin Lloyd, while Iain Wilkie found Gary Anderson too hot to handle, and went out 5-0.

In the quarter-finals, Vincent beat Wayne 5-2, and Gary overcame Michael 5-1.

Gary kept up the good work by beating Colin 5-1 to make the final, where he met Vincent, after his 5-4 defeat of John in the other semi-final.

The final was pretty one-sided, as Gary turned on the style to beat Vincent 5-1.

But, it was a fun day, with seven of the spectators also getting the chance to appear on stage to play one of the pros — and one of them won!

Nineteen 180s were scored, with Kevin Gray being one of the locals to claim one, and he also hit a 110 finish.

Michael Smith headed the 180s, with five, and Simon Parry from Westray also had a 180.

It’s on to the domestic darts now, with the Shapinsay Open on Saturday, and there’s cash prizes and don’t forget to catch the 11.30am boat, returning at 7pm.

Then, the season gets under way, with the ‘A’ League boys competing for the Allied Hotels Cup on Monday, with ‘B’ boys turning out on Tuesday for the St Ola Cup.

Both events are in the Legion club, and players must be registered before they can compete.

With the Wick game arranged for October 4, any player unable to travel should let the secretary know before September 17, as the teams will be chosen that night.