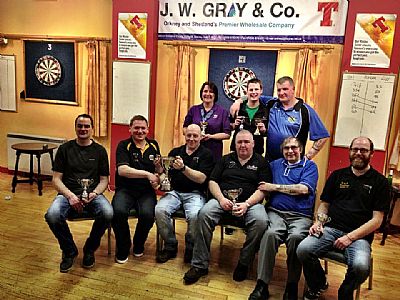 Stevie Linklater won the £500 first prize in the 2014 JW Gray Tennent’s Kirkwall Open beating Shetland's Roger Irvine 5-4 in the final. Losing semi-finalists were Iain Wilkie and Ivan Leslie. Furthest B player was Gary Wilson and furthest lady was Jean Scott.
110 players entered on the day, from Orkney, Shetland, Caithness and further afield. Many thanks to all who turned up, and to our sponsors for their much appreciated support.

Saturday saw another cracking day of darts, as 110 players entered the sixth Tennent’s Kirkwall Open, held in the Masonic Club.
That included 28 ladies and 26 B-registered players — a big improvement — and the standard of darts was of the highest quality.
As usual, there were some early shocks, with former champion Kevin Gray going out to Caithness player Tam Mulraine and, by the quarter-finals, there were six local players, one from Shetland and one from Caithness, but he was seen off by defending champion Ivan Leslie in the semi-final.
Ivan then fell to Stevie Linklater in the semis, and also getting to the final was Whalsay’s Roger Irvine.
And what a final it was — with games swinging one way then the other, and at 4-3 to Roger, Stevie really had to dig deep.
But he’s not a former champion for nothing, and he reeled off the last two games for a dramatic 5-4 win to become the first player to win the Kirkwall Open twice.
The top lady player was Jean Scott, who beat Heather Moodie in a play-off after both ladies made the last 32.
The top B-registered player with the KDDL was Gary Wilson of the Nomads, who made the quarter-finals.
A big thanks to sponsors J. W. Gray, Tennent’s, the Masonic Club, KT Sports, and also to all the players who supplied items for the raffle.
In the Williamsons ‘A’ League, the Legion are just about there, after chalking up another whitewash — 12-0 was the score against Shapinsay, who look like strong Wooden Spoon contenders, as they still have no points.
One more win will put the Legion on a points tally that the Golf Club and Commodores can only equal, but with the Legion’s games difference, it is nearly an extra point.
But the Golf Club boys are keeping up the hunt, with two good wins — 7-5 over Sanday, then 10-2 against Shapinsay.
The Commodores are also up there, after an 8-4 win over the Untouchables.
Sanday also had a second game, and fared a bit better, beating Quoyburray 10-2, and Quoyburray also went down 9-3 to the Wanderers.
Quoyburray ‘B’ fared a bit better, taking a point off the Untouchables ‘A’ in a six-all draw, and there were good points for RBLM, who won 8-4 out in the ’Hope.
The Nomads are back on top of the Williamsons ‘B’ League after an 8-4 defeat of Tankerness, who drew 6-6 with the Legion Arrows in their second game.
No scorecard came in from the Deerness v Sands ‘2’ game.
The Legion Arrows also had a second game, and came out with a 9-3 defeat of the Sands.
The Shore are going strong, and had a very good 7-5 win over St Ola, and the Motorhoose are also coming on strong, after defeating the Likely Lads 8-4, while Meadowbank did well also, beating the Bilco Boys 9-3.
Most of the postponed game are now caught up.
There were 180s from Billy Brown, George Low, Erlend Eunson, Brett Dickenson, Gary Wilson in a 14-dart leg, Jim Brown, Bruce Moar, Gordon Eunson, Hamish Baillie, Keith Bain, Fraser Laird, Leigh Shearer, Robbie Stanger, Billy Ward, Michael Bain, Brian Moar, Davy Henderson, two from Alan Gray, and three from Stevie Linklater.
High checkouts: 100 from Derek Ward snr; 102 Keith Bain; 107 Neil Drever and Robbie Stanger; 108 Michael Bain; 110 Jim Brown; 112 Alan Gray; 113 Aaron Mitchell; 114 Roy Foubister; 113 Brian Moar; 114 Roy Griffiths; 115 Kenny Gillespie; and 142 Glenn Miller.
There is a cup game on Friday, night in the Legion — the Tom Notman Singles, which is open to any player who has ever played in the KDDL and not just registered players.
Then, it is on to the annual East v West game on March 28 in the Legion.
Team lists are up on notice boards, and players should let team captains know if they are unable to play.