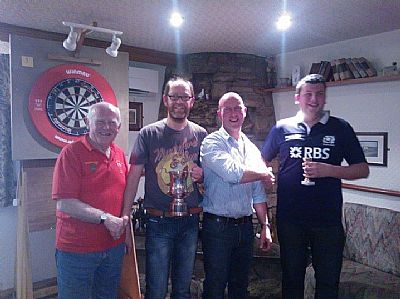 What a fine tournament and a great advert for Kirkwall darts as 44 players came forward for the fourth ranking event — the E. R. & T. Craigie Singles — held out at Quoyburray.
And a big thank you to Eddie and Thorfinn Craigie for supplying prizes for the winner and runner-up as well as the player with the highest checkout.
The entry included 15 ‘B’ players which augurs well for next week’s ‘B’ League singles.
With a big field, big names tumbled from early on and by the points-awarding stage, six ‘B’ players were still in the hunt.
But only Wilfie Tulloch made it into the quarter finals.
The player doing all the damage was Michael Moodie who stormed to the final with wins over Billy Ward, Bruce Moar and Kevin Gray.
In the bottom half, Ian Wilkie was playing out of his skin as he reached the final with wins over Derek Firth and Neil Croy.
And he kept up the great work with a 4-1 final win.
However, the leg that Michael won was in 12 darts.
In all, sixteen 180s were scored, plus a 157 finish frm Michael Muir Snr, which is also the highest amongst the Williamson’s ‘A’ League players.
So four down and only two left for players to get the points needed to get selected for the Shetland match.

In the Williamson’s ‘A’ League the Legion are now leading by six points after a great 10-2 win over their nearest challengers, the Golf Club.
It was their 79th straight win.

Moving up alongside the golf boys are the Commodores, 9-3 winners over Untouchables ‘A’.
The other Untouchables team travelled out to Shapinsay and came back 9-3 winners.
Top score of the week went to Sanday, 11-1 over the Murray Arms.
Just ahead of Sanday in the league are the Wanderers after beating Quoyburray ‘B’ 8-4.
There was a good win for RBLM 7-5 over Quoyburray.

In the Williamson ‘B’ League, the Sands 2 have taken over at the top after beating the Motorhoose 10-2.
The Nomads game was postponed as the Sands couldn’t field a team. Also off was the Bilco Boys v St Ola.
There were good wins for Tankerness 8-4 over Deerness, Legion Arrows 9-3 versus Meadowbank and the Shore 9-3 over the Likely Lads.

The young darts players in Orkney get their chance this week to show off their skills as on Saturday, February 1, the 18-30 trophy is played for.
It’s for players male or female who are aged 18 to 30 and it’s in the Masonic — names by 1.30 p.m. There are trophies and cash on offer to the winner and runner-up.