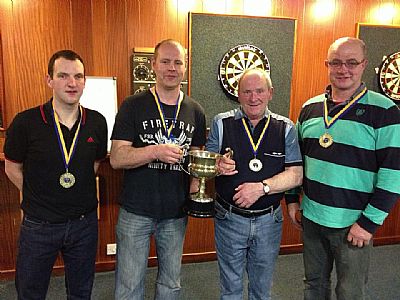 There was a better turnout for the last of the ‘A’ and ‘B’ events, the Henderson Cup, with 12 teams coming forward — nine ‘A’ teams and three ‘B’ teams, with the Bilco Boys and Tankerness joining the Nomads.
And it was the Nomads who made the semi-finals, before going down 4-2 to Quoyburray, who had beaten the Untouchables ‘A’ on the way.
In the bottom half, there was no stopping the Legion, with wins over Sanday, Wanderers and the Golf Club.
With the loss of only four games, they faced Quoyburray in the final, and stormed to a 4-0 win.
The next big event is the E. R. & T. Craigie Singles on Friday night in the Quoyburray, and it’s a ranking points event, and a big turnout is expected.
Then, next Saturday, it’s the 18-30 Singles, which is for players, male and female, aged between 18 and 30. It’s in the Masonic, with names required by 1.30 p.m.
The defending champion is Erlend Ritch, of the West Mainland.
There were 180s from Ian Findlay and Gordon Rendall, and Neil Croy had a 122 finish.
With both leagues now under way, team captains are reminded to put all 180s and high checkouts on the back of score cards.
Tennents and J. W. Gray will be this year’s Kirkwall Open sponsors, on March 8, in the Masonic Club, at 1.30 p.m.