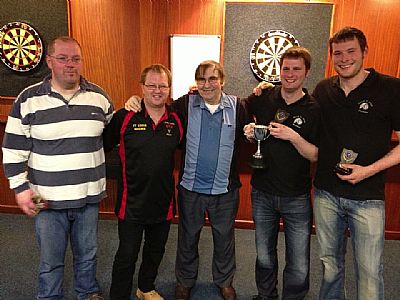 A very poor and disappointing turnout for the ‘B’ League Doubles, as only 14 pairs came forward. It’s the poorest turnout for some time, and has been declining over the last ten years.
It didn’t distract from the quality of play, as there were some excellent games; none more than in the final, as Brett Dickenson and Gary Wilson of the Nomads took on Colin Findlay and Derek Firth of the Likely Lads.
The score of 4-1 to the Nomads boys looks very one-sided, but it was far from that. Only the Nomads boys’ better finishing carried the day.
In the Williamsons ‘A’ League, the Legion had a week off, as the Untouchables ‘A’ couldn’t field a team. That allowed both the Golf Club and Commodores to move up, level on 24 points.
The Golf boys won a tight one — 7-5 against the Untouchables, and the Commodores overcame the Murray Arms 8-4. No score in from the Sanday v Wanderers game.
The local Derby at Quoyburray saw them share the spoils in a six-all draw, and good points for RBLM, as they beat Shapinsay 9-3.

In the Williamson’s ‘B’ League, there was another whitewash. This time, it was the Bilco Boys on the receiving end, as the Nomads thumped them 12-0 to remain in top position.
But, not far behind them are Sands ‘2’, after they won 8-4 over the Legion Arrows.
Also up there are St Ola, with a 7-5 defeat of Meadowbank, and what a great win for the Motorhoose — 7-5 against Tankerness.
Also, good points for the Shore — 8-4 victors over Deerness.
No score in from the Sands v Likely Lads. All these postponed games must be played before the end of this year.

The final big game of the first half of the season is next Friday (December 13) — the Festive Singles.

It’s a ranking point event, and is open to any male player.
Also, the festive raffle will be drawn. Get your tickets in.