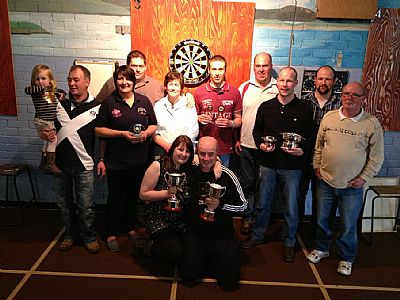 Jim Scollies latest KDDL report:
What a great day was had out in Shapinsay for the first ever Shapinsay open singles, and what a great venue; the set up was as good as I’ve seen in many a day, and as good as you’ll find anywhere in the north of Scotland.

So, well done to Shapinsay Darts Club. 27 gents and 14 ladies made their way to the islands’ school.

Most of the players were members of the K-DDL, with a sprinkling of West Mainland and local players, and, fittingly, the final was between Derek Firth of the K-DDL and Ian Eunson of the local club. Derek won 4-0.

The ladies’ final was won by Shona Gray, 4-2 over Jean Scott, both members of the LK-DDL.

A great day was had by all, and to round it off, Derek handed back his £100 winnings to the Shapinsay Darts Club — a noble gesture. Here’s to next year.

On the local front, the cups continue, with the Spiers Cup on Monday for both ‘A’ and ‘B’ teams, of four with up to two reserves. It is in the Legion Club, starting at 7.30 p.m.

If any captains still have cups, please return them to the secretary or any committee member.

The Spiers Cup is the last team cup for a few weeks, as the teams settle down for the start of the league darts, which begins on Monday, September 23.
Once again, Williamson’s are sponsoring both leagues, thanks again for the support.

There is still no news from The Sands about their teams or whether it will be one team or two.

The Pit Stop Singles Cup, which is  a ranking points competition, will be for registered KDDL players only from now on.