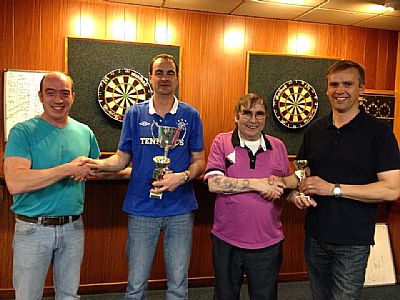 A great turn out for the Louttit Singles, the first of the seven ranking points events, which included 18 ‘B’ league players.
And it was Jamie Drever, a ‘B’ player, who hit the headlines, as he beat three very good ‘A’ players to get into the semi-finals, where he went down 3-0 to Robbie Stanger.
As always happens, lots of the big names fell early on, including the holder, Kevin Gray.
In fact, eight players who made the team last year got no points.
But this was only the first one.
Making the final in the bottom half was Ivan Leslie, who had been playing great darts, and he continued in the final to come out 4-0 winner.

Too many games are not being played for various reasons in both leagues, so a clear picture on how the leagues stand are not easy to assess.

But, going strong this year after last year’s poor performance are the Untouchables — 10-2 winners over the Murray Arms.
Also going well are the Golf Club, also 10-2 winners, over the Untouchables ‘A’, who had a better result against Quoyburray, winning 7-5.
The Legion v Wanderers game was postponed, and there was a first win for Quoyburray ‘B’ — 10-2 over Shapinsay, who have still to gain a point.
Sanday also won 7-5, over RBLM, and Quoyburray also have no points, going down to the Commodores 8-4.

In the Williamson’s ‘B’ league, first points for Meadowbank, 8-4 victors over the Likely Lads.
Sands ‘2’ also won 8-4, as they beat St Ola.
Tankerness took out the Shore 7-5, as did Deerness over the Bilco Boys.
The other two games were not played, so there’s quite a backlog of games starting to gather after only three weeks’ play.

There were 180s from Leigh Shearer, Sinclair Craigie, Davy Henderson, Roy Foubister, George Low, Gary Norquoy, Leonard Craigie, Michael Montgomery, Archie Yule, Ivan Leslie, and two from Robbie Stanger, Ian Wilkie and Graham Reid, and four from Stevie Linklater, who also had a 174, plus a 12-dart leg.
Kevin Gray had two by 13-dart legs, and Ian Findlay had one.

Next week, all league games are suspended for a week, so three cups can be played.
On Monday, it’s the Lynnfield Cup, for ‘A’ league teams of four to six players, and it’s in the Legion. Names by 7.30 p.m.
Then, on Tuesday, it’s the turn of the ‘B’ players, with the Foubister Cup in the Masonic Club.
Then it’s on to Friday, with both cricket singles and doubles being played in the Legion, with names by 7.30 p.m.

League entry fees are due by Friday, October 25.
Failure to pay may result in points being lost.