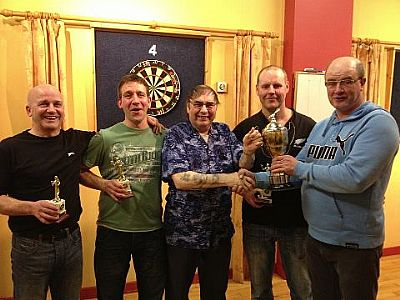 Another good turn out of 23 pairs came forward for the league doubles, the second last ranking points event.
That number was well up on last year, and, as usual, some big names bit the dust early on, but, by semi-final time, it was very familiar faces who lined up, with the defending champions Kevin Gray and Derek Firth taking out the Commodores pairing of Billy Ward and Robbie Stanger 3-1.
In the other semi, the two boys from Quoyburray ‘B’, Graham Reid and Paddy Kirkpatrick, had a great 3-2 win over the Untouchables’ Ian Wilkie and Michael Bain.
They both played well in the final, but couldn’t hold the champs, and went down 4-2 in what was a terrific final.

In the Williamson’s ‘A’ League, it is nearly all over, as the Legion crushed second-placed Golf Club 10-2.
It was a great game, in which eight by 180s were scored, the most this year in any league game.
The Legion now lead by 13 points, with seven games to go.
The Commodores closed the gap on second spot by beating Quoyburray 8-4, and Sanday got back on form, defeating Meadowbank 10-2.
Quoyburray ‘B’ had a great draw by holding the Untouchables six-all.
The other Untouchables team got full points by beating RBLM 7-5, and it is really a fight for second spot now.

In the Williamson’s ‘B’ League, Shapinsay still lead, even though there was no score in from their game with Legion Arrows.
The Sands are in second spot, after beating the Sands ‘2’ 7-5, the same score the Murray Arms had over the Shore ‘2’.
It was also 7-5 for Deerness over the Likely Lads, and, once again, a very good point for the Nomads, as they held the high-flying Tankerness 6-6.
Shapinsay did beat the Shore ‘2’ 9-3 in their postponed game.
The other Shore team drew six-all with the Bilco Boys.

If anyone knows where the wooden spoons are, let the secretary know.