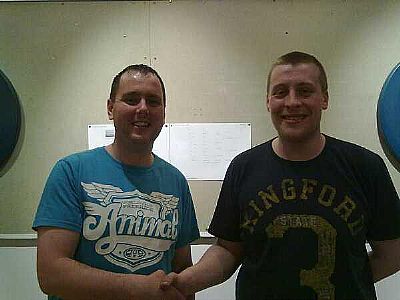 32 players entered the 2nd qualifier for this year's Orkney Darts Classic on Friday evening in the Stromness Golf Club, a reasonable entry considering the glorious weather outside.
Given that it is now over a month since the local leagues ended, the standard on show was pretty good and consistency proved to be the key for the four players who made it through to the semi-finals in the event which was organised and run by the Kirkwall and District Darts League.


The draw threw up a huge opportunity for several up-and-coming young players to qualify from the bottom half, as the top half was loaded with several of last years qualifiers, as well as several well seasoned players.  In the bottom half young Ronnie Breck from Birsay played very well and showed little nerves as he dispatched of two of the players involved in last month's epic inter-county match, before finally succumbing to the Merkister's Malcolm Reid who was playing some superb darts.


Similarly Paul Firth, who has yet to play any league darts, did well to reach the quarter finals, before the more experienced Jim Hamilton turned on the style to beat him.
In the top half Michael Bain was scoring steadily and finishing excellently, progressing to the semi's by beating Erlend Ritch from Stromness.  Stevie Linklater kept doing what he does best and pipped former team mate Robbie Stanger to set up a clash with Michael in the semi's.


In the first semi Jim Hamilton scored well but Mal Reid was on top form and was just too hot to handle, mopping up the first leg with a cool 100 finish to punish Jim's miss at the double.
From then on Mal continued to outscore Jim and eventually nailed the double that qualified him to play the pro's in September, proving a popular winner in Stromness and the first WMDA player to qualify this year.


The second semi was a real battle, as was to be expected since both players had been at this stage before by qualifying for last year's Classic.  As the match entered the fifth and deciding leg, Stevie opened up a huge gap and it looked as if he was going through but several missed attempts at double allowed Michael his chance and he calmly finished 62 in 2 darts to once more set up a date at Picky.
With the important qualifying business out of the way, Michael and Mal played out the final, which was a decidedly more relaxed affair than the semi's.


Some good scoring from both players made for a close game with Michael eventually winning 3-1. Congratulations to both players on qualifying.
Thanks go the Stromness Golf Club for their hospitality and we now look forward to the 3rd qualifier in the Commodore this Friday.
With only 4 places now up for grabs, and a whole host of players capable of filling them, the last 2 qualifying events should make for some sizzling entertainment.