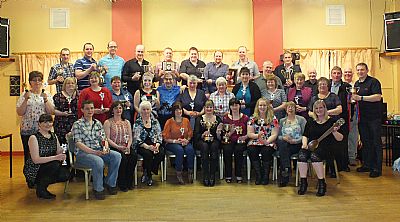 The Kirkwall and District Darts League’s 2011-12 season finally came to a close with the presentation of trophies being held last Friday in the Masonic Club.
A very good turn-out of trophy winners and team players enjoyed a fun night of darts and pool organised by the combined ladies’ and men’s committees, with music by Martin Meek. A good time was held by all.
But the darts action is not finished yet as on Friday, the ladies and gents charity doubles takes place in the Masonic Club at 7.30 p.m.
It’s a agreat fun night with a big raffle and cash prizes for the winners in the darts. Enter with a partner, if possible, but if not come along anyway.
All the proceeds go to help the Belarus children fund.
Then, next Friday, it’s the ever popular Tattie Bogle mixed doubles. It’s also for charity.
Any player or non player can enter as it’s names out of a hat. There’s also a raffle.
A correction to the 1990 game up in Shetland – the last time Kirkwall won up there before this year’s great result was in 1990, Jim Scollie says he was was captain of the victorious team and not a player. We won 11-6. His last game in Shetland was in 1992.
All players should be getting ready for the four qualifying games coming up. The first is on Friday, May 18 in the Masonic Club – names by 7.30 p.m.
It’s an open entry so any player, male or female, over 18, can enter.
Two players from each game go forward to the “big one” on September 1 at Picky. Registration books are now available from the secretary.