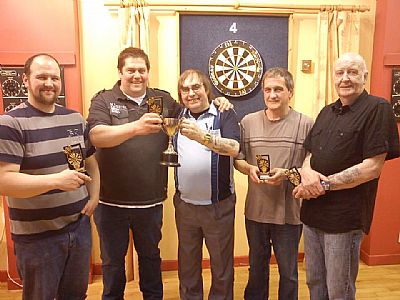 It was not a great turnout for the ‘B’ League Doubles, with 13 pairs entering, but an improvement on last year.
There was some splendid darts thrown and no more so than in the final, as the trophy crossed the water to Shapinsay with Graham Rendall and Colin Leslie beating Neil Drever and Roy Griffiths 4-2 in a really first-class display.
Steady scoring and great finishing won the day, and there’s more darts this Friday, with the League Doubles.
It is open to registered players only, as it’s a ranking points event – the second last one, with the final one next Friday, the League Singles.
Both are in the Legion Club at 7.30pm.
There’s still about a dozen players who could make the selection to go to Shetland in April, so let’s have a great turnout.
There is no change at the top of either of the Williamson’s leagues, and it’s getting to the stage that teams are dropping out of the points possible range.
The Legion are nearly there after another 10-2 win, this time over Meadowbank.
Now, only four teams can stop them but, even then, they would have to lose three games out of six to lose the Williamson’s ‘A’ League crown.
Still in second spot are Untouchables after a close 7-5 win over the Commodores, and the Wanderers are still in third place, following their 10-2 defeat of Quoyburray.
The other Quoyburray team didn’t fare much better, going down 9-3 to Untouchables ‘A’.
The Golf Club are still in with a shout, after beating Sanday 8-4, but it’s not a very loud shout.
The Williamson’s ‘B’ League is very much like the ‘A’ League, with RBLM still nine points ahead.
Their game with Shapinsay wasn’t played for some reason, and that allowed the Murray Arms to close the gap, with a 9-3 defeat of the Likely Lads.
There was a very big win for Shore ‘2’, a 12-nil whitewash of Deerness – meaning they become only the second team behind RBLM to score a whitewash in the ‘B’ League.
Also, there was a good 9-3 win for the Sands over the Shore, who look like candidates for the wooden spoon.
No score from the Bilco Boys match with Tankerness.
Every effort much be made to have these games played before the break.
There were 180s from Stewart Gray, Billy Ward (Billy also had a 177), David Kirkpatrick, Bruce Moar, Keith Brumpton, Stevie Linklater, Hamish Baillie, Brian Moar, Davy Henderson, Michael Montgomery, Brian Stevenson, Mark Louttit, Neil Croy and two from Kevin Gray, which puts him away ahead in the table with 23, with Ivan Leslie second on 17.
High checkouts: 100s from Edrian Skea, Paul Foubister and James Flett; 106 Michael Muir Jnr; 108 Ryan Tulloch; 116 and 117 Bruce Moar; 118 Ross Groundwater; 130 Ryan Tulloch on the bull; and a table-topping 160 from Jimmy Miller that will take some beating!
There is still no sign of the Albert Cup (Seatter Cup). It was won last year by the Shore, so they should know is whereabouts. Please let the secretary know.