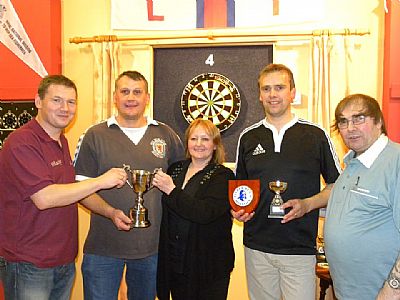 A great turn-out of 62 players entered for the Davy Cooper Open Singles. Players from East, West and the Northern Isles turned up to honour the memory of Davy, and it was good to see some non-darts players taking part, but no female players entered.


As it was a short format of only three legs, some of the better known players didn’t get far, but by the quarter-final stage it was all Kirkwall players, except for two, who were left and only Simon Parry, from Westray, carried the Northern Isles flag. But that was as far as Simon got. The other one was Erlend Ritch, from Stromness, but he went out in the semi-final to Bruce Moar.


In the other semi, Robbie Stanger powered past Mike Bain to make it an all-Kirkwall final.
It looked like the title was going to Robbie when he won the first two games, but Bruce wasn’t finished as he dug deep, and he won the next three to win 3-2 in an excellent final.
No big finishes but steady honest darts. About £600 was raised for the two charities, the RNLI and Fishermen's Mission, and a big thank you goes to all who took part.

In the Williamson’s ‘A’ League, the top two undefeated teams, the Legion and Untouchables clashed, and it was the Legion who came out best, winning 8-4. They now lead by six points, but have played a game more and, of course, with the withdrawal of Wanderers ‘B’, two teams each week will have a no game week, so things will change. A big gap has now opened up to the third-placed team, Wanderers, who beat the Untouchables ‘A’ 7-5.
It was the same score the Golf Club obtained out at the Commodore, and Sanday also won 7-5 over Quoyburray ‘B’, who have still to win a game and prop up the League.
Meadowbank had an 8-4 win over Quoyburray.

In the Williamson’s ‘B’ League, RBLM have opened up an eight point gap at the top, following their big 11-1 win over Deerness. Their nearest challengers, the Sands, also won 11-1 over the Bilco Boys, and the Shore ‘2’ dropped points once again, as they only drew 6-6 with the Likely Lads, but Tankerness had a great result by beating the strong Murray Arms 8-4. No score in from the Shapinsay v Shore game.


All postponed games must be played before the festive break.