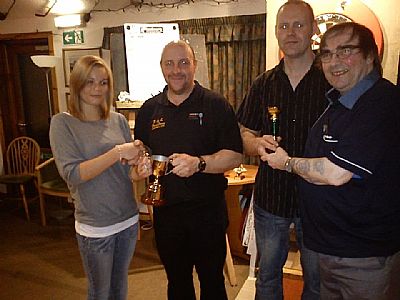 The Wanderers ‘B’ team have folded and withdrawn from the Williamson’s ‘A’ League. Points will be readjusted and a new table compiled.
Onto happier matters – and what a classic night of darts there was at the Golf Club on Friday night in the Pit Stop Open Singles, when a total of 34 players took part.
Before the final, some classic darts were played. By the quarter finals, left in were six registered players and two non registered players.
And there was very nearly a nine darter as Stevie Linklater hit seven treble 20s only to just miss the treble 19. But he did finish in 11 darts.
Also going forward to the semi-finals was the holder of the cup, Kevin Gray, along with his doubles partner Derek Firth, and Bruce Moar who only just went down 3-2 to Stevie Linklater.
Kevin reached the final with a 3-0 victory over Derek.
And what a final it was. League secretray Jim Scollie has  been involved with darts in Kirkwall for 45 years and said that he  thought that the final was as good, if not better, than anything he had seen in Orkney.
It had everything – great scoring, classic finishing and four 180s – two by each player.
In the end, it was Stevie who came out on top with a 4-2 scoreline and a 85.4 three dart average. Kevin was on 79 average, and Stevie hit five 180s overall.
In the Williamson’s ‘A’ League the Legion moved three points clear of the Untouchables, who didn’t have a game, with a 9-3 win over Meadowbank.
Both the two top reams meet this week.
Elsewhere the Wanderers had a narrow 7-5 win at the Golf Club. It was a mixed week for Sanday. They beat Quoyburray  9-3 but lost 8-4 to Untouchables ‘A’.
It’s good to see some of the postponed games getting played now. The Untouchables ‘A’ also played twice and drew 6-6 with Quoyburray ‘B’ which was their first point this season.
The poor old Wanderers ‘B’ only had three players once again and crashed 10-2 to the Commodores.
In the Williamson’s ‘B’ League RBLM have opened a six point gap after yet another 12-0 whitewash. On the receiving end were the Bilco Boys.
Moving into second spot are the Murray Arms who won 9-3 at the Shore but the Murray also lost at home to Shapinsay 8-4.
The Shore also had another game losing to Deerness 8-4. The Sands had a good 6-6 draw with the Shore 2. Tankerness also held the Likely Lands to a 6-6 draw.
It was a record week for 180s with 37 being scored from Derek Ward Snr, Keith Bain, Aaron Edwardson, Lee Macpherson, Sean Stanger, Gordon Rendall, Ali Flett, Graham Reid, Trevor Shearer, Sinclair Craigie, Davy Henderson, Michael Moodie, and two each from Alan Gray, Martin Peace, Ray Butcher, Paul Foubister and Derek Firth, three each from Kevin Gray, Ivan Leslie and Derek Ward Jnr.
High checkouts included a 100 from David Kirkpatrick (twice), 102 from Brian Moar, who also had a 150, 103 from Monty, 105 by Gary Drever, 108 by Ray Butcher, Michael Muir Snr, Michael Moodie, 111 by Derek Ward Jnr, 116 by Colin Ross, Alan Gray (twice) and Neil Croy, 121 by Derek Firth, 123 by Michael Muir Jnr, 130 by Billy Ward and 152 by Gordon Rendall.
Saturday sees the start of a busy period for the Kirkwall District Darts players – first with the Davy Cooper Memorial Cup. It’s an open singles event in memory of Davy who tragically lost his life earlier this year.
Davy was the West Mainland and Orkney Singles Champion. The event in the Masonic Club on Saturday – names by 2.30 p.m. for a 3 p.m. start.
Any player can enter, male or female. It’s the first of five cups to be played for before the Christmas break.
Don’t forget to get the raffle tickets in by November 30.
Derek Firth leads the ranking points table on 19 points while, on 12 points, are Brian Moar, Bruce Moar, and Kevin Gray, Ivan Leslie has nine.