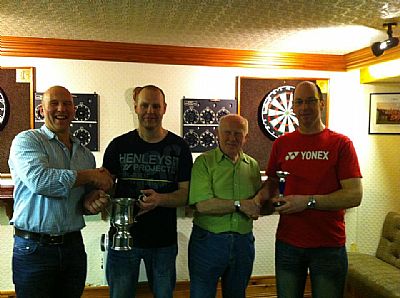 The Quoyburray Inn was the scene on friday for what some were describing as one of the best darts competition that there has been in the KDDL. 40 players turned up hoping to walk home with the E.R & T Craigie singles cup and almost every one of those players produced their very best darts.

Right from the offset in the preliminary round the high standard was evident. Robbie Stanger beat Brian Moar 3-2 in the preliminary round despite Brian averaging 92.65! Into the last 32 and the 180's and high checkouts came thick and fast with 11 180's and 8 big finishes recorded during the night. Robbie and Ivan Leslie had a humdinger with robbie again winning the game 3 games to 1 courtesy of 2 big finishes in defiance of Ivan's brace of 180's. Iain Wilkie lost by the odd game in 5 in another great game with Derek Firth. Other points of note were young Sean Stanger losing to Ross Donaldson despite hitting a 180 and 126 finish in his match. Another two young guns came head to head in the guise of Michael Moodie and James Flett. Both played superbly, James finishing 105 before standing back and watching Michael wrap up the match 3-2 with a terrific 154 checkout.

A combination of high quality entertaining darts and just the right level of alcohol consumption had the Quoyburray punters in good voice. When it came to the business end of the night and the semi final stage, the lively crowd were not to be disappointed. A resurgent Martin Peace found Ian Linklater too hot to handle in the 1st semi final and Kevin Gray won a close tussle with Stevie Linklater to progress. In the final Ian played very well, averaging 79.7, an average that would have won many a final,but could not keep up with the scoring and finishing prowess of Kevin who was epitomising everything that had been great about the night as a whole. Kevin had an astounding average of 91.1 in his 4-0 win which included 5 140s, a 102 check and the match winning 116 finish.

Kevin went home with the trophy, but many a player went home with a smile on their face as they knew they couldn't play much better. It's been said for a while now that the standard on the KDDL just keeps getting better, but many were stunned by just how good it has really become and how many players, both young and experienced are capable of producing the standard required to become a county player. Roll on the next ranking competition.