The hypocrisy of the Labour party on the NHS has been exposed again today, after Shadow Health Secretary Andy Burnham’s speech to Labour conference claimed that the health service was being ‘privatised’ by the Tories – just days after his party claimed that the NHS was ‘safe with a No vote’.

Mr Burnham’s speech today suggested that “true whole person care” was “not possible in Cameron’s fragmented, privatised, demoralised” NHS and argued that the 2015 election is “a battle for the soul of the NHS” – despite his party arguing throughout the referendum campaign that health service funding was safe in Westminster’s hands.

Mr Burnham’s claims today come despite the fact that it was a Labour government which opened the floodgates on NHS privatisation – allowing the use of the private sector to double under the last four years of their term in office and signing off on the privatisation of Hinchingbrooke Hospital.
Commenting, SNP MSP Dr Aileen McLeod, who sits on the Health Committee, said:

“This is absolutely breath-taking hypocrisy from the Labour Party – just days after assuring people in Scotland that the NHS would be safe with a No vote, Andy Burnham says that the NHS is facing privatisation from the Tories. Yet again, the Labour party say one thing in political campaigns in Scotland and another thing completely south of the border.

“And the fact is that no matter how much they try to hide it, it was the Labour party who opened the floodgates on NHS privatisation in England – until Andy Burnham accepts responsibility for this his words simply have no credibility.

“With this track record it is absolutely no wonder that the Labour Party in Scotland are ‘in danger of dying out’ according to Henry McLeish – ordinary people in traditional Labour heartlands are completely fed up with Labour facing one way in Scotland and another in Westminster, which is why more and more of them are switching to the SNP.

“In contrast to Labour’s failures, the record of the SNP in government is second to none when it comes to our NHS – protecting funding, delivering on standards and guaranteeing the wage rises of our nurses.  But with more cuts coming down the line from Westminster our NHS budget is going to be put under real pressure.

“That’s exactly why we’ll continue to argue for the substantial economic powers the No parties promised the people of Scotland during the referendum campaign – to allow us to protect our NHS funding from the impact of the cuts and privatisation agenda of a Tory government we didn’t vote for.  The people of Scotland won’t accept anything less.” 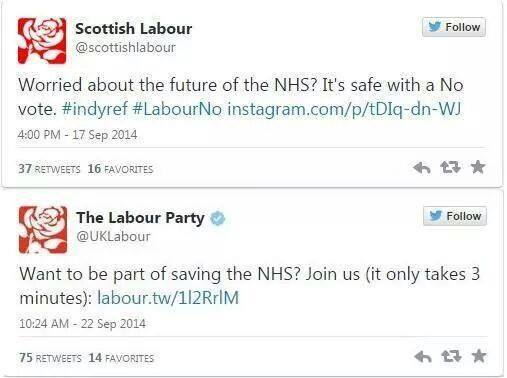