Fifteen Snipes and 20 other boats made a spectacular sight for Holm Sailing Club's annual regatta in St. Mary's Bay on Saturday.

For the morning races the wind was very light south west falling away to nil. An enjoyable lunch was served up by the wives and friends of the club.

After lunch the wind freshened from the south east for the remaining races.

At the prizegfiving immediately after the allcomers race, Commodore Sinclair Muir thanked the visiting sailors, officials, rescue boats, ladies for preparing lunch and all who had helped in any way. A very successful supper dance was held later in the Commodore Motel.

Results were as follows: 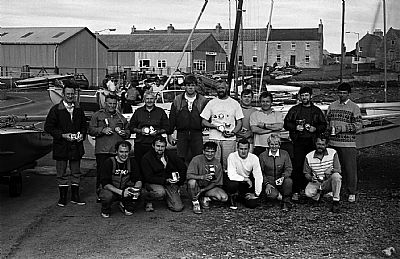 The regatta was sailed on Saturday July 25 under depressing conditions- though the sailors did not appear in any way depressed in spite of a number of capsizes and rigging being carried away in the strong winds.

It was a day of steady heavy rain with a very fresh south easterly windwhich brought a 'chap' into the bay, adding to the difficulties and making it rather hazardous off the point of Berriedale. But perhaps the excellent lunch provided for the sailors at the Pierowall Hotel gave them courage to face the elements!

A total of 31 vessels took part, among them five local skiffs, which are organisers are very happy to see increasing in numbers at a time when it was feared they were about to fade from the scene. It was gratifying, too, to see six of the larger yachts visiting for the event. They certainly add grace to the proceedings.

The sailing club wish to extend their thanks to the visitors from Kirkwall, Holm and Stromness clubs who help so much to make the day a successful event, also to the 'pierhead' officials: Davie Lennie, Hugh MacGillivray and Sandy Firth who take a very great burden off the shoulders of the local ones.

The organisers also wish to thank the ladies who provided the teas during the afternoon, those folk who provided the 'eats' for these teas, the manager of the factory, Dave Hume, the 'Hume Bus Co.' under the managership of Reta Harcus who transported the sailors to and from the hotel, the Westray School Board for the use of the school bus and the driver, Bill McCracken. Thanks are also due to the skippers of the rescue craft, who did not have a restful day by any means.

The Kirkwall lifeboat was a very welcome sight during the afternoon when it paid a social visit, taking parties of people for trips around the bay.

Before the M.V. Earl Thirfin left at night, the prizes were handed to the prize winners by Mrs. Zena Bain, the islanders and many visitors then proceeding homewards to prepare for the Regatta Dance at which music was provided by 'The Harbour Lights' band.

The overall yacht cup was won by S. Manson.

Saturday morning started with pouring rain and a southerly 20 knot gusting 30 wind, as sailors gathered for the Kirkwall Regatta. With a weather forecast for the wind to moderate, nine deeply reefed yachts started the first race of the day around the inner course.

The class races started with the Snipes followed by the 505s, mixed centreboards, and the catamarans. The gusty wind put the sfaety boats through their paces with the occasional capsize.

An excellent lunch was served in the Grinel by the ladies was appreciated by the competitors.

After lunch the yachts lined up for their second race. By now the rain had stopped and the wind had eased. A longer course was set around Scargun and Thieves Holm, and 11 yachts set off under full sail.

Next race was for centreboards with 17 dinghies starting followed by the catamarans' long race.

Sixteen dingjhies crossed the line in the Allcomers with the wind threatening to drop completely.

The last race of the day was challenged by the Hobie 18s and Yachting World catamarans.

At the prizegiving held in the Girnel, commodore R. Moar thanked the safety boat crews, the timekeepers, the ladies and visiting yachtsmen for their participation in making the day a success.

May Burgess was invited to present the various cups and trophies to the winners of the 32 boat fleet. After the prize winners posed for the cameras the band tuned up and dancing brought another regatta day to an end.